Hedge funds and large money managers usually invest with a focus on the long-term horizon and, therefore, short-lived dips on the charts, usually don’t make them change their opinion towards a company. This time it may be different. During the fourth quarter of 2018 we observed increased volatility and small-cap stocks underperformed the market. Hedge fund investor letters indicated that they are cutting their overall exposure, closing out some position and doubling down on others. Let’s take a look at the hedge fund sentiment towards Century Aluminum Co (NASDAQ:CENX) to find out whether it was one of their high conviction long-term ideas.

Century Aluminum Co (NASDAQ:CENX) shares haven’t seen a lot of action during the third quarter. Overall, hedge fund sentiment was unchanged. The stock was in 11 hedge funds’ portfolios at the end of December. The level and the change in hedge fund popularity aren’t the only variables you need to analyze to decipher hedge funds’ perspectives. A stock may witness a boost in popularity but it may still be less popular than similarly priced stocks. That’s why at the end of this article we will examine companies such as Green Bancorp Inc (NASDAQ:GNBC), Exterran Corporation (NYSE:EXTN), and SouFun Holdings Limited (NYSE:SFUN) to gather more data points.

At the end of the fourth quarter, a total of 11 of the hedge funds tracked by Insider Monkey were long this stock, a change of 0% from the second quarter of 2018. By comparison, 17 hedge funds held shares or bullish call options in CENX a year ago. With hedgies’ positions undergoing their usual ebb and flow, there exists a few key hedge fund managers who were upping their holdings significantly (or already accumulated large positions). 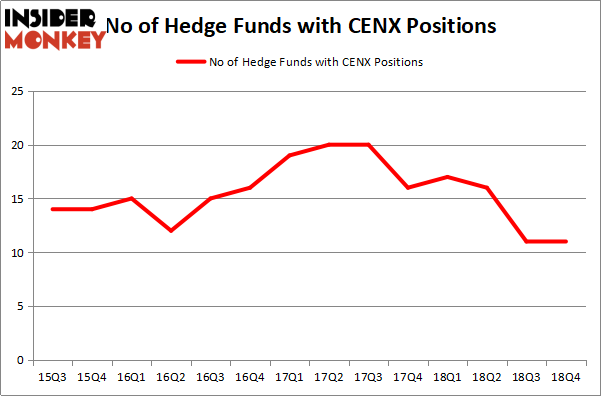 Among these funds, Citadel Investment Group held the most valuable stake in Century Aluminum Co (NASDAQ:CENX), which was worth $14.1 million at the end of the fourth quarter. On the second spot was Fisher Asset Management which amassed $10.1 million worth of shares. Moreover, Balyasny Asset Management, Millennium Management, and Royce & Associates were also bullish on Century Aluminum Co (NASDAQ:CENX), allocating a large percentage of their portfolios to this stock.

Due to the fact that Century Aluminum Co (NASDAQ:CENX) has experienced bearish sentiment from hedge fund managers, logic holds that there was a specific group of funds who sold off their full holdings by the end of the third quarter. It’s worth mentioning that Phill Gross and Robert Atchinson’s Adage Capital Management cut the biggest position of all the hedgies monitored by Insider Monkey, valued at about $7.2 million in stock, and Cliff Asness’s AQR Capital Management was right behind this move, as the fund said goodbye to about $5.6 million worth. These transactions are important to note, as aggregate hedge fund interest stayed the same (this is a bearish signal in our experience).

Let’s go over hedge fund activity in other stocks – not necessarily in the same industry as Century Aluminum Co (NASDAQ:CENX) but similarly valued. We will take a look at Green Bancorp Inc (NASDAQ:GNBC), Exterran Corporation (NYSE:EXTN), Fang Holdings Limited (NYSE:SFUN), and Tucows Inc. (NASDAQ:TCX). This group of stocks’ market valuations are similar to CENX’s market valuation.

As you can see these stocks had an average of 9.5 hedge funds with bullish positions and the average amount invested in these stocks was $40 million. That figure was $41 million in CENX’s case. Exterran Corporation (NYSE:EXTN) is the most popular stock in this table. On the other hand Green Bancorp Inc (NASDAQ:GNBC) is the least popular one with only 7 bullish hedge fund positions. Century Aluminum Co (NASDAQ:CENX) is not the most popular stock in this group but hedge fund interest is still above average. Our calculations showed that top 15 most popular stocks) among hedge funds returned 24.2% through April 22nd and outperformed the S&P 500 ETF (SPY) by more than 7 percentage points. Hedge funds were also right about betting on CENX, though not to the same extent, as the stock returned 18.3% and outperformed the market as well.