With the fourth-quarter round of 13F filings behind us it is time to take a look at the stocks in which some of the best money managers in the world preferred to invest or sell heading into the first quarter. One of these stocks was Cathay General Bancorp (NASDAQ:CATY).

Cathay General Bancorp (NASDAQ:CATY) has seen an increase in hedge fund interest in recent months. Our calculations also showed that caty isn’t among the 30 most popular stocks among hedge funds.

In the eyes of most shareholders, hedge funds are viewed as underperforming, old financial tools of years past. While there are over 8000 funds in operation at the moment, We look at the bigwigs of this group, around 750 funds. These hedge fund managers watch over bulk of the hedge fund industry’s total capital, and by shadowing their matchless equity investments, Insider Monkey has brought to light numerous investment strategies that have historically defeated the S&P 500 index. Insider Monkey’s flagship hedge fund strategy defeated the S&P 500 index by nearly 5 percentage points a year since its inception in May 2014 through early November 2018. We were able to generate large returns even by identifying short candidates. Our portfolio of short stocks lost 27.5% since February 2017 (through March 12th) even though the market was up nearly 25% during the same period. We just shared a list of 6 short targets in our latest quarterly update and they are already down an average of 6% in less than a month.

Heading into the first quarter of 2019, a total of 14 of the hedge funds tracked by Insider Monkey held long positions in this stock, a change of 8% from the second quarter of 2018. By comparison, 10 hedge funds held shares or bullish call options in CATY a year ago. With hedge funds’ sentiment swirling, there exists a select group of noteworthy hedge fund managers who were upping their holdings substantially (or already accumulated large positions). 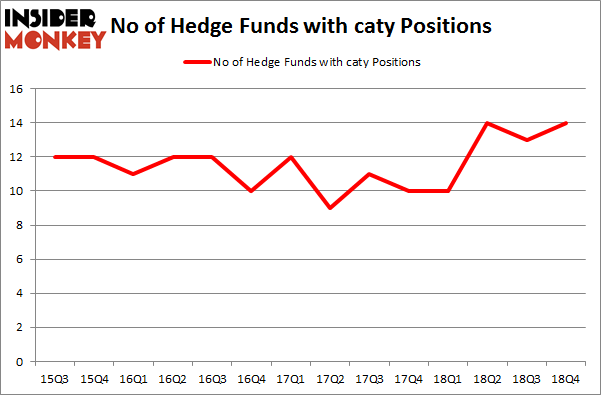 According to Insider Monkey’s hedge fund database, GLG Partners, managed by Noam Gottesman, holds the most valuable position in Cathay General Bancorp (NASDAQ:CATY). GLG Partners has a $13 million position in the stock, comprising 0.1% of its 13F portfolio. The second most bullish fund manager is Adage Capital Management, managed by Phill Gross and Robert Atchinson, which holds a $10.1 million position; the fund has less than 0.1%% of its 13F portfolio invested in the stock. Some other professional money managers that hold long positions contain Jim Simons’s Renaissance Technologies, Cliff Asness’s AQR Capital Management and John Overdeck and David Siegel’s Two Sigma Advisors.

Consequently, key money managers have jumped into Cathay General Bancorp (NASDAQ:CATY) headfirst. Marshall Wace LLP, managed by Paul Marshall and Ian Wace, created the most valuable position in Cathay General Bancorp (NASDAQ:CATY). Marshall Wace LLP had $1.2 million invested in the company at the end of the quarter. Hoon Kim’s Quantinno Capital also made a $0.6 million investment in the stock during the quarter. The following funds were also among the new CATY investors: Michael Platt and William Reeves’s BlueCrest Capital Mgmt. and Benjamin A. Smith’s Laurion Capital Management.

As you can see these stocks had an average of 17.75 hedge funds with bullish positions and the average amount invested in these stocks was $280 million. That figure was $48 million in CATY’s case. Immunomedics, Inc. (NASDAQ:IMMU) is the most popular stock in this table. On the other hand J&J Snack Foods Corp. (NASDAQ:JJSF) is the least popular one with only 10 bullish hedge fund positions. Cathay General Bancorp (NASDAQ:CATY) is not the least popular stock in this group but hedge fund interest is still below average. This is a slightly negative signal and we’d rather spend our time researching stocks that hedge funds are piling on. Our calculations showed that top 15 most popular stocks) among hedge funds returned 24.2% through April 22nd and outperformed the S&P 500 ETF (SPY) by more than 7 percentage points. Unfortunately CATY wasn’t nearly as popular as these 15 stock (hedge fund sentiment was quite bearish); CATY investors were disappointed as the stock returned 5.6% and underperformed the market. If you are interested in investing in large cap stocks with huge upside potential, you should check out the top 15 most popular stocks) among hedge funds as 13 of these stocks already outperformed the market this year.