Insider Monkey finished processing more than 700 13F filings submitted by hedge funds and prominent investors. These filings show these funds’ portfolio positions as of December 31st, 2018. In this article we are going to take a look at smart money sentiment towards BGC Partners, Inc. (NASDAQ:BGCP).

Is BGC Partners, Inc. (NASDAQ:BGCP) worth your attention right now? Investors who are in the know are reducing their bets on the stock. The number of long hedge fund positions went down by 4 recently. Our calculations also showed that BGCP isn’t among the 30 most popular stocks among hedge funds. BGCP was in 23 hedge funds’ portfolios at the end of the fourth quarter of 2018. There were 27 hedge funds in our database with BGCP holdings at the end of the previous quarter. 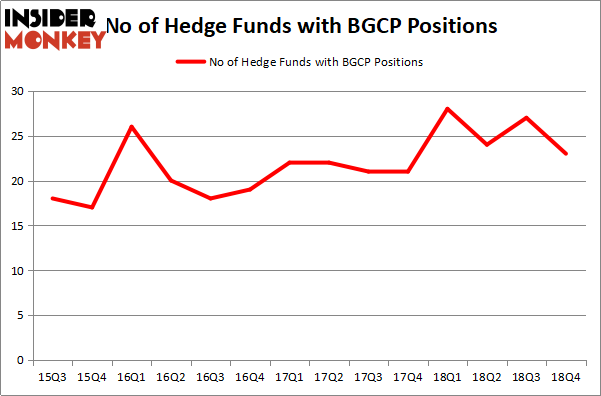 Among these funds, Point72 Asset Management held the most valuable stake in BGC Partners, Inc. (NASDAQ:BGCP), which was worth $74.2 million at the end of the fourth quarter. On the second spot was Cardinal Capital which amassed $59.4 million worth of shares. Moreover, Rubric Capital Management, Millennium Management, and Renaissance Technologies were also bullish on BGC Partners, Inc. (NASDAQ:BGCP), allocating a large percentage of their portfolios to this stock.

Since BGC Partners, Inc. (NASDAQ:BGCP) has experienced falling interest from the entirety of the hedge funds we track, logic holds that there was a specific group of money managers who sold off their positions entirely last quarter. Intriguingly, Paul Marshall and Ian Wace’s Marshall Wace LLP said goodbye to the biggest investment of the 700 funds watched by Insider Monkey, valued at close to $35 million in stock, and Emanuel J. Friedman’s EJF Capital was right behind this move, as the fund sold off about $32.9 million worth. These moves are interesting, as aggregate hedge fund interest was cut by 4 funds last quarter.

As you can see these stocks had an average of 17.25 hedge funds with bullish positions and the average amount invested in these stocks was $249 million. That figure was $254 million in BGCP’s case. AnaptysBio, Inc. (NASDAQ:ANAB) is the most popular stock in this table. On the other hand First Merchants Corporation (NASDAQ:FRME) is the least popular one with only 13 bullish hedge fund positions. Compared to these stocks BGC Partners, Inc. (NASDAQ:BGCP) is more popular among hedge funds. Our calculations showed that top 15 most popular stocks) among hedge funds returned 24.2% through April 22nd and outperformed the S&P 500 ETF (SPY) by more than 7 percentage points. Unfortunately BGCP wasn’t nearly as popular as these 15 stock and hedge funds that were betting on BGCP were disappointed as the stock returned 8.4% and underperformed the market. If you are interested in investing in large cap stocks with huge upside potential, you should check out the top 15 most popular stocks) among hedge funds as 13 of these stocks already outperformed the market this year.