The government requires hedge funds and wealthy investors that crossed the $100 million equity holdings threshold are required to file a report that shows their positions at the end of every quarter. Even though it isn’t the intention, these filings level the playing field for ordinary investors. The latest round of 13F filings disclosed the funds’ positions on December 31. We at Insider Monkey have made an extensive database of nearly 750 of those elite funds and prominent investors’ filings. In this article, we analyze how these elite funds and prominent investors traded Berry Global Group Inc (NYSE:BERY) based on those filings.

Berry Global Group Inc (NYSE:BERY) has experienced an increase in support from the world’s most elite money managers in recent months. BERY was in 43 hedge funds’ portfolios at the end of December. There were 36 hedge funds in our database with BERY holdings at the end of the previous quarter. Our calculations also showed that BERY isn’t among the 30 most popular stocks among hedge funds.

In today’s marketplace there are plenty of gauges stock market investors have at their disposal to grade publicly traded companies. Two of the most under-the-radar gauges are hedge fund and insider trading moves. Our experts have shown that, historically, those who follow the top picks of the best fund managers can outperform the market by a very impressive margin (see the details here).

How have hedgies been trading Berry Global Group Inc (NYSE:BERY)? 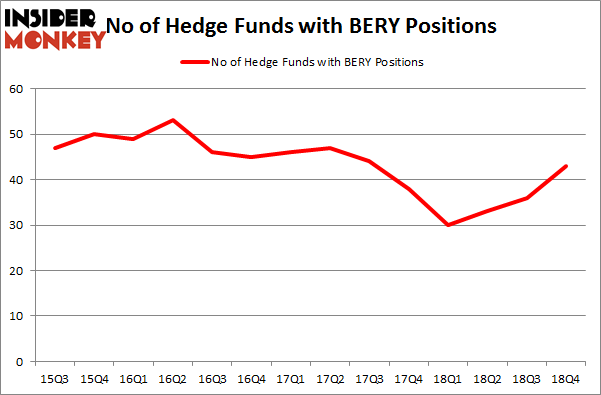 As one would reasonably expect, specific money managers have been driving this bullishness. Highline Capital Management, managed by Jacob Doft, assembled the biggest position in Berry Global Group Inc (NYSE:BERY). Highline Capital Management had $110.7 million invested in the company at the end of the quarter. Peter Rathjens, Bruce Clarke and John Campbell’s Arrowstreet Capital also initiated a $20.7 million position during the quarter. The other funds with new positions in the stock are Vasan Kesavan, Srikumar Kesavan and Sandeep Ramesh’s Meghalaya Partners, Alexander Mitchell’s Scopus Asset Management, and Don Morgan’s Brigade Capital.

As you can see these stocks had an average of 20.75 hedge funds with bullish positions and the average amount invested in these stocks was $277 million. That figure was $2132 million in BERY’s case. CDK Global Inc (NASDAQ:CDK) is the most popular stock in this table. On the other hand Kimco Realty Corp (NYSE:KIM) is the least popular one with only 16 bullish hedge fund positions. Compared to these stocks Berry Global Group Inc (NYSE:BERY) is more popular among hedge funds. Considering that hedge funds are fond of this stock in relation to its market cap peers, it may be a good idea to analyze it in detail and potentially include it in your portfolio. Our calculations showed that the top 15 most popular stocks among hedge funds returned 21.3% through April 8th and outperformed the S&P 500 ETF (SPY) by more than 5 percentage points. Hedge funds were also right about betting on BERY, though not to the same extent, as the stock returned 17.9% and outperformed the market as well.