Bed Bath & Beyond Inc. (NASDAQ:BBBY) shareholders have witnessed a decrease in hedge fund interest recently. Our calculations also showed that bbby isn’t among the 30 most popular stocks among hedge funds.

What have hedge funds been doing with Bed Bath & Beyond Inc. (NASDAQ:BBBY)?

At Q1’s end, a total of 29 of the hedge funds tracked by Insider Monkey held long positions in this stock, a change of -3% from the previous quarter. On the other hand, there were a total of 21 hedge funds with a bullish position in BBBY a year ago. With the smart money’s capital changing hands, there exists a select group of notable hedge fund managers who were boosting their holdings significantly (or already accumulated large positions). 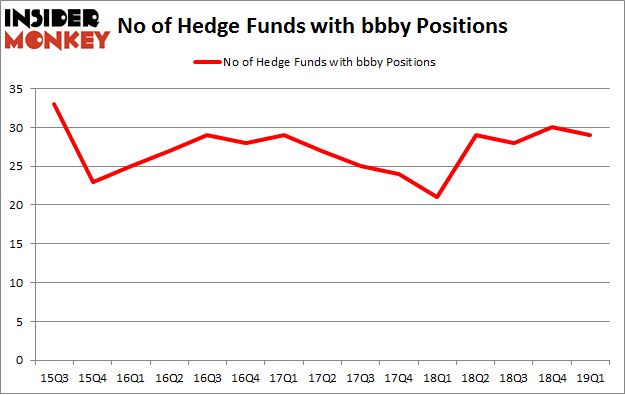 According to Insider Monkey’s hedge fund database, Cliff Asness’s AQR Capital Management has the largest position in Bed Bath & Beyond Inc. (NASDAQ:BBBY), worth close to $112.9 million, accounting for 0.1% of its total 13F portfolio. Sitting at the No. 2 spot is Jim Simons of Renaissance Technologies, with a $88.7 million position; the fund has 0.1% of its 13F portfolio invested in the stock. Some other professional money managers that hold long positions include Ted White and Christopher Kiper’s Legion Partners Asset Management, Peter Rathjens, Bruce Clarke and John Campbell’s Arrowstreet Capital and Seth Wunder’s Black-and-White Capital.

Because Bed Bath & Beyond Inc. (NASDAQ:BBBY) has experienced a decline in interest from hedge fund managers, it’s safe to say that there exists a select few funds that elected to cut their positions entirely last quarter. Intriguingly, Kevin Michael Ulrich and Anthony Davis’s Anchorage Advisors dumped the biggest stake of the 700 funds tracked by Insider Monkey, totaling close to $34 million in stock, and Dmitry Balyasny’s Balyasny Asset Management was right behind this move, as the fund said goodbye to about $7.4 million worth. These moves are interesting, as aggregate hedge fund interest was cut by 1 funds last quarter.

As you can see these stocks had an average of 20.25 hedge funds with bullish positions and the average amount invested in these stocks was $413 million. That figure was $479 million in BBBY’s case. Zogenix, Inc. (NASDAQ:ZGNX) is the most popular stock in this table. On the other hand Aphria Inc. (NYSE:APHA) is the least popular one with only 9 bullish hedge fund positions. Bed Bath & Beyond Inc. (NASDAQ:BBBY) is not the most popular stock in this group but hedge fund interest is still above average. This is a slightly positive signal but we’d rather spend our time researching stocks that hedge funds are piling on. Our calculations showed that top 20 most popular stocks among hedge funds returned 1.9% in Q2 through May 30th and outperformed the S&P 500 ETF (SPY) by more than 3 percentage points. Unfortunately BBBY wasn’t nearly as popular as these 20 stocks and hedge funds that were betting on BBBY were disappointed as the stock returned -24.8% during the same period and underperformed the market. If you are interested in investing in large cap stocks with huge upside potential, you should check out the top 20 most popular stocks among hedge funds as 13 of these stocks already outperformed the market so far in Q2.