Legendary investors such as Jeffrey Talpins and Seth Klarman earn enormous amounts of money for themselves and their investors by doing in-depth research on small-cap stocks that big brokerage houses don’t publish. Small cap stocks -especially when they are screened well- can generate substantial outperformance versus a boring index fund. That’s why we analyze the activity of those elite funds in these small-cap stocks. In the following paragraphs, we analyze AxoGen, Inc. (NASDAQ:AXGN) from the perspective of those elite funds.

Is AxoGen, Inc. (NASDAQ:AXGN) a great investment today? Prominent investors are in a pessimistic mood. The number of long hedge fund positions were trimmed by 3 in recent months. Our calculations also showed that AXGN isn’t among the 30 most popular stocks among hedge funds. AXGN was in 18 hedge funds’ portfolios at the end of December. There were 21 hedge funds in our database with AXGN positions at the end of the previous quarter.

In the 21st century investor’s toolkit there are dozens of tools stock traders have at their disposal to analyze publicly traded companies. Some of the most under-the-radar tools are hedge fund and insider trading signals. We have shown that, historically, those who follow the best picks of the best hedge fund managers can outpace the S&P 500 by a superb margin (see the details here). 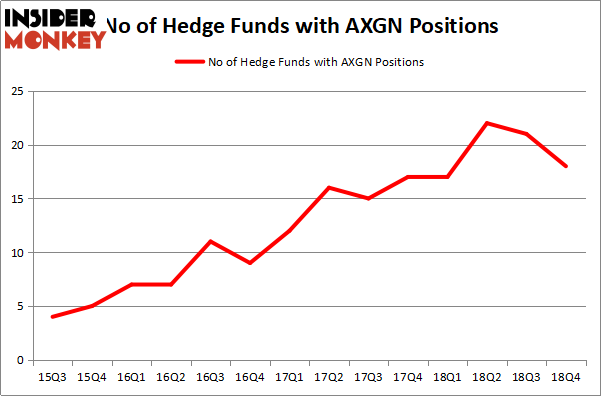 More specifically, Marshall Wace LLP was the largest shareholder of AxoGen, Inc. (NASDAQ:AXGN), with a stake worth $29.5 million reported as of the end of December. Trailing Marshall Wace LLP was Opaleye Management, which amassed a stake valued at $26.6 million. Rock Springs Capital Management, GLG Partners, and Renaissance Technologies were also very fond of the stock, giving the stock large weights in their portfolios.

Seeing as AxoGen, Inc. (NASDAQ:AXGN) has witnessed bearish sentiment from hedge fund managers, it’s safe to say that there was a specific group of hedge funds who sold off their entire stakes heading into Q3. It’s worth mentioning that Louis Bacon’s Moore Global Investments cut the largest stake of the 700 funds monitored by Insider Monkey, comprising about $0.9 million in stock. Roger Ibbotson’s fund, Zebra Capital Management, also cut its stock, about $0.5 million worth. These moves are interesting, as aggregate hedge fund interest was cut by 3 funds heading into Q3.

As you can see these stocks had an average of 17.75 hedge funds with bullish positions and the average amount invested in these stocks was $126 million. That figure was $103 million in AXGN’s case. Denbury Resources Inc. (NYSE:DNR) is the most popular stock in this table. On the other hand U.S. Silica Holdings Inc (NYSE:SLCA) is the least popular one with only 14 bullish hedge fund positions. AxoGen, Inc. (NASDAQ:AXGN) is not the most popular stock in this group but hedge fund interest is still above average. This is a slightly positive signal but we’d rather spend our time researching stocks that hedge funds are piling on. Our calculations showed that top 15 most popular stocks) among hedge funds returned 24.2% through April 22nd and outperformed the S&P 500 ETF (SPY) by more than 7 percentage points. Unfortunately AXGN wasn’t nearly as popular as these 15 stock and hedge funds that were betting on AXGN were disappointed as the stock returned -1.2% and underperformed the market. If you are interested in investing in large cap stocks with huge upside potential, you should check out the top 15 most popular stocks) among hedge funds as 13 of these stocks already outperformed the market this year.