Is Alleghany Corporation (NYSE:Y) a good investment right now? We check hedge fund and billionaire investor sentiment before delving into hours of research. Hedge funds spend millions of dollars on Ivy League graduates, expert networks, and get tips from investment bankers and industry insiders. Sure they sometimes fail miserably but historically their consensus stock picks outperformed the market after adjusting for known risk factors.

Alleghany Corporation (NYSE:Y) was in 19 hedge funds’ portfolios at the end of December. Y has seen a decrease in hedge fund sentiment in recent months. There were 21 hedge funds in our database with Y positions at the end of the previous quarter. Our calculations also showed that Y isn’t among the 30 most popular stocks among hedge funds.

How have hedgies been trading Alleghany Corporation (NYSE:Y)?

At Q4’s end, a total of 19 of the hedge funds tracked by Insider Monkey held long positions in this stock, a change of -10% from the second quarter of 2018. The graph below displays the number of hedge funds with bullish position in Y over the last 14 quarters. With hedge funds’ sentiment swirling, there exists an “upper tier” of notable hedge fund managers who were increasing their stakes considerably (or already accumulated large positions). 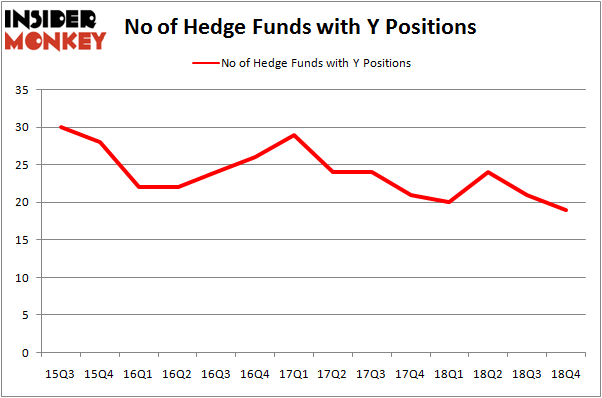 More specifically, Polar Capital was the largest shareholder of Alleghany Corporation (NYSE:Y), with a stake worth $83.5 million reported as of the end of September. Trailing Polar Capital was Royce & Associates, which amassed a stake valued at $68.5 million. AQR Capital Management, Gillson Capital, and Lomas Capital Management were also very fond of the stock, giving the stock large weights in their portfolios.

Judging by the fact that Alleghany Corporation (NYSE:Y) has faced falling interest from the aggregate hedge fund industry, logic holds that there lies a certain “tier” of fund managers that elected to cut their entire stakes last quarter. Interestingly, Ric Dillon’s Diamond Hill Capital said goodbye to the biggest stake of all the hedgies monitored by Insider Monkey, totaling close to $14 million in stock. Michael Platt and William Reeves’s fund, BlueCrest Capital Mgmt., also dumped its stock, about $1.7 million worth. These transactions are important to note, as aggregate hedge fund interest fell by 2 funds last quarter.

Let’s go over hedge fund activity in other stocks – not necessarily in the same industry as Alleghany Corporation (NYSE:Y) but similarly valued. We will take a look at Canopy Growth Corporation (NYSE:CGC), Autohome Inc (NYSE:ATHM), BanColombia S.A. (NYSE:CIB), and Macy’s, Inc. (NYSE:M). All of these stocks’ market caps resemble Y’s market cap.

As you can see these stocks had an average of 13.75 hedge funds with bullish positions and the average amount invested in these stocks was $437 million. That figure was $299 million in Y’s case. Macy’s, Inc. (NYSE:M) is the most popular stock in this table. On the other hand Canopy Growth Corporation (NYSE:CGC) is the least popular one with only 5 bullish hedge fund positions. Alleghany Corporation (NYSE:Y) is not the most popular stock in this group but hedge fund interest is still above average. This is a slightly positive signal but we’d rather spend our time researching stocks that hedge funds are piling on. Our calculations showed that top 15 most popular stocks among hedge funds returned 19.7% through March 15th and outperformed the S&P 500 ETF (SPY) by 6.6 percentage points. Unfortunately Y wasn’t in this group. Hedge funds that bet on Y were disappointed as the stock lost .5% and underperformed the market. If you are interested in investing in large cap stocks, you should check out the top 15 hedge fund stocks as 13 of these outperformed the market.