Clovis Oncology Inc (NASDAQ:CLVS) investors should be aware of a decrease in hedge fund interest recently. CLVS was in 24 hedge funds’ portfolios at the end of December. There were 32 hedge funds in our database with CLVS holdings at the end of the previous quarter. Our calculations also showed that CLVS isn’t among the 30 most popular stocks among hedge funds.

What have hedge funds been doing with Clovis Oncology Inc (NASDAQ:CLVS)? 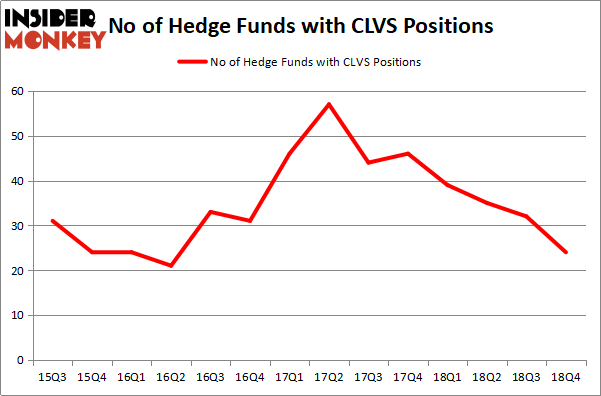 When looking at the institutional investors followed by Insider Monkey, Palo Alto Investors, managed by William Leland Edwards, holds the number one position in Clovis Oncology Inc (NASDAQ:CLVS). Palo Alto Investors has a $94.1 million position in the stock, comprising 5% of its 13F portfolio. Coming in second is Armistice Capital, led by Steven Boyd, holding a $90.4 million position; the fund has 6.9% of its 13F portfolio invested in the stock. Remaining professional money managers that are bullish consist of Jeremy Green’s Redmile Group, Stephen DuBois’s Camber Capital Management and Samuel Isaly’s OrbiMed Advisors.

Judging by the fact that Clovis Oncology Inc (NASDAQ:CLVS) has faced a decline in interest from hedge fund managers, we can see that there was a specific group of money managers that decided to sell off their entire stakes by the end of the third quarter. It’s worth mentioning that Christopher James’s Partner Fund Management said goodbye to the biggest stake of all the hedgies monitored by Insider Monkey, totaling close to $56.6 million in stock, and Behzad Aghazadeh’s venBio Select Advisor was right behind this move, as the fund said goodbye to about $33.7 million worth. These transactions are important to note, as aggregate hedge fund interest was cut by 8 funds by the end of the third quarter.

As you can see these stocks had an average of 17.5 hedge funds with bullish positions and the average amount invested in these stocks was $183 million. That figure was $452 million in CLVS’s case. Constellium NV (NYSE:CSTM) is the most popular stock in this table. On the other hand Tennant Company (NYSE:TNC) is the least popular one with only 10 bullish hedge fund positions. Clovis Oncology Inc (NASDAQ:CLVS) is not the most popular stock in this group but hedge fund interest is still above average. This is a slightly positive signal but we’d rather spend our time researching stocks that hedge funds are piling on. Our calculations showed that top 15 most popular stocks) among hedge funds returned 24.2% through April 22nd and outperformed the S&P 500 ETF (SPY) by more than 7 percentage points. Unfortunately CLVS wasn’t nearly as popular as these 15 stock and hedge funds that were betting on CLVS were disappointed as the stock returned 13.1% and underperformed the market. If you are interested in investing in large cap stocks with huge upside potential, you should check out the top 15 most popular stocks) among hedge funds as 13 of these stocks already outperformed the market this year.