Hedge Funds and other institutional investors have just completed filing their 13Fs with the Securities and Exchange Commission, revealing their equity portfolios as of the end of June. At Insider Monkey, we follow nearly 750 active hedge funds and notable investors and by analyzing their 13F filings, we can determine the stocks that they are collectively bullish on. One of their picks is Veritex Holdings Inc (NASDAQ:VBTX), so let’s take a closer look at the sentiment that surrounds it in the current quarter.

Is Veritex Holdings Inc (NASDAQ:VBTX) a healthy stock for your portfolio? The best stock pickers are taking a pessimistic view. The number of long hedge fund bets went down by 3 lately. Our calculations also showed that VBTX isn’t among the 30 most popular stocks among hedge funds (see the video below). 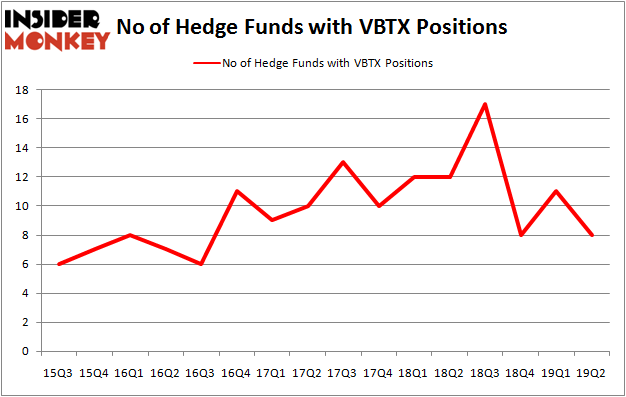 What does smart money think about Veritex Holdings Inc (NASDAQ:VBTX)?

At the end of the second quarter, a total of 8 of the hedge funds tracked by Insider Monkey were long this stock, a change of -27% from the previous quarter. Below, you can check out the change in hedge fund sentiment towards VBTX over the last 16 quarters. So, let’s review which hedge funds were among the top holders of the stock and which hedge funds were making big moves.

More specifically, Mendon Capital Advisors was the largest shareholder of Veritex Holdings Inc (NASDAQ:VBTX), with a stake worth $53 million reported as of the end of March. Trailing Mendon Capital Advisors was Millennium Management, which amassed a stake valued at $10.7 million. Forest Hill Capital, Marshall Wace LLP, and Basswood Capital were also very fond of the stock, giving the stock large weights in their portfolios.

Because Veritex Holdings Inc (NASDAQ:VBTX) has faced declining sentiment from hedge fund managers, it’s easy to see that there lies a certain “tier” of funds who were dropping their full holdings by the end of the second quarter. At the top of the heap, Charles Paquelet’s Skylands Capital sold off the largest investment of the 750 funds watched by Insider Monkey, totaling an estimated $0.8 million in stock. Benjamin A. Smith’s fund, Laurion Capital Management, also dropped its stock, about $0.8 million worth. These bearish behaviors are important to note, as aggregate hedge fund interest fell by 3 funds by the end of the second quarter.

As you can see these stocks had an average of 19.25 hedge funds with bullish positions and the average amount invested in these stocks was $148 million. That figure was $85 million in VBTX’s case. Constellium SE (NYSE:CSTM) is the most popular stock in this table. On the other hand Industrial Logistics Properties Trust (NASDAQ:ILPT) is the least popular one with only 9 bullish hedge fund positions. Compared to these stocks Veritex Holdings Inc (NASDAQ:VBTX) is even less popular than ILPT. Hedge funds dodged a bullet by taking a bearish stance towards VBTX. Our calculations showed that the top 20 most popular hedge fund stocks returned 24.4% in 2019 through September 30th and outperformed the S&P 500 ETF (SPY) by 4 percentage points. Unfortunately VBTX wasn’t nearly as popular as these 20 stocks (hedge fund sentiment was very bearish); VBTX investors were disappointed as the stock returned -6% during the third quarter and underperformed the market. If you are interested in investing in large cap stocks with huge upside potential, you should check out the top 20 most popular stocks among hedge funds as many of these stocks already outperformed the market so far in 2019.