Here is What Hedge Funds Think About The Southern Company (SO)

A whopping number of 13F filings filed with U.S. Securities and Exchange Commission has been processed by Insider Monkey so that individual investors can look at the overall hedge fund sentiment towards the stocks included in their watchlists. These freshly-submitted public filings disclose money managers’ equity positions as of the end of the three-month period that ended December 31, so let’s proceed with the discussion of the hedge fund sentiment on The Southern Company (NYSE:SO).

The Southern Company (NYSE:SO) has experienced a decrease in activity from the world’s largest hedge funds recently. SO was in 20 hedge funds’ portfolios at the end of the fourth quarter of 2018. There were 24 hedge funds in our database with SO holdings at the end of the previous quarter. Our calculations also showed that SO isn’t among the 30 most popular stocks among hedge funds. 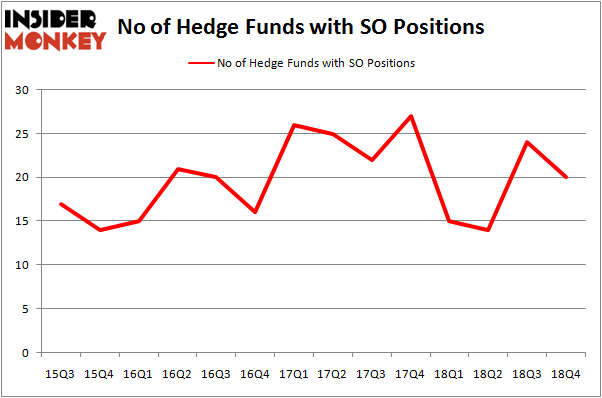 More specifically, Renaissance Technologies was the largest shareholder of The Southern Company (NYSE:SO), with a stake worth $366.2 million reported as of the end of September. Trailing Renaissance Technologies was Zimmer Partners, which amassed a stake valued at $84.5 million. D E Shaw, Ariel Investments, and AQR Capital Management were also very fond of the stock, giving the stock large weights in their portfolios.

Seeing as The Southern Company (NYSE:SO) has witnessed declining sentiment from the aggregate hedge fund industry, it’s safe to say that there were a few fund managers who were dropping their full holdings heading into Q3. Interestingly, Jonathan Barrett and Paul Segal’s Luminus Management dumped the largest position of the “upper crust” of funds tracked by Insider Monkey, comprising an estimated $30.1 million in call options, and Dmitry Balyasny’s Balyasny Asset Management was right behind this move, as the fund sold off about $28.4 million worth. These moves are important to note, as total hedge fund interest dropped by 4 funds heading into Q3.

Let’s check out hedge fund activity in other stocks – not necessarily in the same industry as The Southern Company (NYSE:SO) but similarly valued. We will take a look at Allergan plc (NYSE:AGN), Crown Castle International Corp. (REIT) (NYSE:CCI), Celgene Corporation (NASDAQ:CELG), and Suncor Energy Inc. (NYSE:SU). This group of stocks’ market valuations are similar to SO’s market valuation.

As you can see these stocks had an average of 45.75 hedge funds with bullish positions and the average amount invested in these stocks was $2648 million. That figure was $708 million in SO’s case. Allergan plc (NYSE:AGN) is the most popular stock in this table. On the other hand Suncor Energy Inc. (NYSE:SU) is the least popular one with only 30 bullish hedge fund positions. Compared to these stocks The Southern Company (NYSE:SO) is even less popular than SU. Our calculations showed that top 15 most popular stocks among hedge funds returned 19.7% through March 15th and outperformed the S&P 500 ETF (SPY) by 6.6 percentage points. Hedge funds were also right about betting on SO as the stock returned 19.5% and outperformed the market as well.

Hedge Funds Have Never Been This Bullish On Thermo Fisher Scientific Inc. (...
Monthly Newsletter Strategy
Download a free copy of our newsletter and see the details inside!
Hedge Fund Resource Center
Related News
Should You Buy The Southern Company (SO)? 50 Best Utility Dividend Stocks To Invest In 3 Utility Stocks That Will Pay You To Invest In Them Is Southern Co (SO) A Good Stock To Buy? Scout Daily Update: Dallas Fed Down 22 Straight Months Which Is the Better Valuation Metric? The P/E Ratio or the PEG Ratio: Part 1 10 Stocks That Had Their Price Targets Raised Tuesday Ten of the Most Common Addictions 13 African Countries with the Largest White Population in 2018 6 Causes of Human Trafficking in Africa, India, and US
Billionaire Hedge Funds