As we already know from media reports and hedge fund investor letters, many hedge funds lost money in fourth quarter, blaming macroeconomic conditions and unpredictable events that hit several sectors, with technology among them. Nevertheless, most investors decided to stick to their bullish theses and their long-term focus allows us to profit from the recent declines. In particular, let’s take a look at what hedge funds think about The Bank of Nova Scotia (NYSE:BNS) in this article.

Is The Bank of Nova Scotia (NYSE:BNS) worth your attention right now? The smart money is becoming hopeful. The number of long hedge fund positions moved up by 3 recently. Our calculations also showed that BNS isn’t among the 30 most popular stocks among hedge funds.

We’re going to analyze the recent hedge fund action regarding The Bank of Nova Scotia (NYSE:BNS).

How are hedge funds trading The Bank of Nova Scotia (NYSE:BNS)?

At Q4’s end, a total of 14 of the hedge funds tracked by Insider Monkey were bullish on this stock, a change of 27% from one quarter earlier. On the other hand, there were a total of 11 hedge funds with a bullish position in BNS a year ago. With hedge funds’ positions undergoing their usual ebb and flow, there exists a few noteworthy hedge fund managers who were boosting their holdings substantially (or already accumulated large positions). 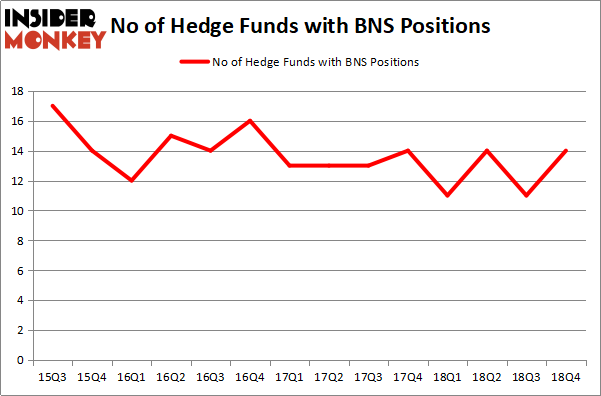 According to publicly available hedge fund and institutional investor holdings data compiled by Insider Monkey, Peter Rathjens, Bruce Clarke and John Campbell’s Arrowstreet Capital has the biggest position in The Bank of Nova Scotia (NYSE:BNS), worth close to $254.8 million, amounting to 0.7% of its total 13F portfolio. Coming in second is Ken Griffin of Citadel Investment Group, with a $215.1 million position; 0.1% of its 13F portfolio is allocated to the company. Other members of the smart money that hold long positions include Jim Simons’s Renaissance Technologies, Cliff Asness’s AQR Capital Management and Ray Dalio’s Bridgewater Associates.

With a general bullishness amongst the heavyweights, specific money managers have been driving this bullishness. Fairfax Financial Holdings, managed by Prem Watsa, created the most valuable position in The Bank of Nova Scotia (NYSE:BNS). Fairfax Financial Holdings had $12.3 million invested in the company at the end of the quarter. Paul Marshall and Ian Wace’s Marshall Wace LLP also initiated a $0.6 million position during the quarter. The only other fund with a new position in the stock is Dmitry Balyasny’s Balyasny Asset Management.

Let’s also examine hedge fund activity in other stocks – not necessarily in the same industry as The Bank of Nova Scotia (NYSE:BNS) but similarly valued. We will take a look at Becton, Dickinson and Company (NYSE:BDX), Biogen Inc. (NASDAQ:BIIB), Westpac Banking Corporation (NYSE:WBK), and Chubb Limited (NYSE:CB). All of these stocks’ market caps are closest to BNS’s market cap.

As you can see these stocks had an average of 32 hedge funds with bullish positions and the average amount invested in these stocks was $1204 million. That figure was $746 million in BNS’s case. Biogen Inc. (NASDAQ:BIIB) is the most popular stock in this table. On the other hand Westpac Banking Corporation (NYSE:WBK) is the least popular one with only 10 bullish hedge fund positions. The Bank of Nova Scotia (NYSE:BNS) is not the least popular stock in this group but hedge fund interest is still below average. This is a slightly negative signal and we’d rather spend our time researching stocks that hedge funds are piling on. Our calculations showed that top 15 most popular stocks among hedge funds returned 19.7% through March 15th and outperformed the S&P 500 ETF (SPY) by 6.6 percentage points. Unfortunately WFC wasn’t in this group. Hedge funds that bet on WFC were disappointed as the stock returned 10.9% and underperformed the market. If you are interested in investing in large cap stocks, you should check out the top 15 hedge fund stocks as 13 of these outperformed the market.