Here is What Hedge Funds Think About Robert Half International Inc. (RHI)

Investing in small cap stocks has historically been a way to outperform the market, as small cap companies typically grow faster on average than the blue chips. That outperformance comes with a price, however, as there are occasional periods of higher volatility. The last 12 months is one of those periods, as the Russell 2000 ETF (IWM) has underperformed the larger S&P 500 ETF (SPY) by more than 10 percentage points. Given that the funds we track tend to have a disproportionate amount of their portfolios in smaller cap stocks, they have seen some volatility in their portfolios too. Actually their moves are potentially one of the factors that contributed to this volatility. In this article, we use our extensive database of hedge fund holdings to find out what the smart money thinks of Robert Half International Inc. (NYSE:RHI).

Robert Half International Inc. (NYSE:RHI) has experienced an increase in hedge fund interest of late. Our calculations also showed that RHI isn’t among the 30 most popular stocks among hedge funds (view the video below).

At the moment there are a large number of metrics market participants employ to value their stock investments. Two of the best metrics are hedge fund and insider trading sentiment. We have shown that, historically, those who follow the best picks of the top fund managers can outpace the S&P 500 by a very impressive margin (see the details here).

Unlike some fund managers who are betting on Dow reaching 40000 in a year, our long-short investment strategy doesn’t rely on bull markets to deliver double digit returns. We only rely on hedge fund buy/sell signals. Let’s take a peek at the recent hedge fund action encompassing Robert Half International Inc. (NYSE:RHI).

What does smart money think about Robert Half International Inc. (NYSE:RHI)?

Heading into the third quarter of 2019, a total of 26 of the hedge funds tracked by Insider Monkey were bullish on this stock, a change of 4% from the previous quarter. On the other hand, there were a total of 19 hedge funds with a bullish position in RHI a year ago. With the smart money’s positions undergoing their usual ebb and flow, there exists a select group of notable hedge fund managers who were upping their stakes substantially (or already accumulated large positions). 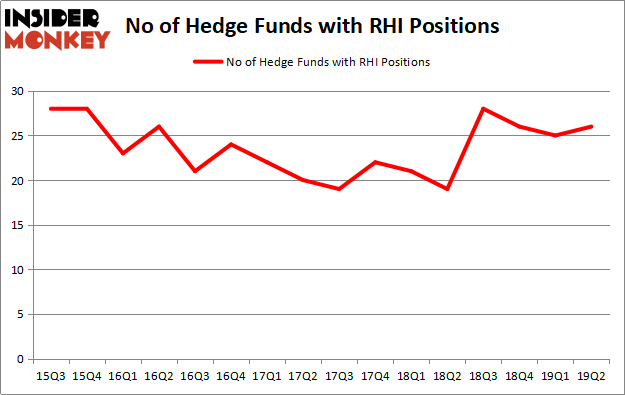 Of the funds tracked by Insider Monkey, Cliff Asness’s AQR Capital Management has the number one position in Robert Half International Inc. (NYSE:RHI), worth close to $362.7 million, accounting for 0.4% of its total 13F portfolio. On AQR Capital Management’s heels is Millennium Management, led by Israel Englander, holding a $54.7 million position; 0.1% of its 13F portfolio is allocated to the stock. Some other peers that are bullish comprise Ken Griffin’s Citadel Investment Group, Renaissance Technologies and Dmitry Balyasny’s Balyasny Asset Management.

Now, key money managers were leading the bulls’ herd. SG Capital Management, managed by Ken Grossman and Glen Schneider, assembled the most outsized call position in Robert Half International Inc. (NYSE:RHI). SG Capital Management had $10.4 million invested in the company at the end of the quarter. Michael Kharitonov and Jon David McAuliffe’s Voleon Capital also made a $3.4 million investment in the stock during the quarter. The other funds with new positions in the stock are Richard Chilton’s Chilton Investment Company, Ray Dalio’s Bridgewater Associates, and Matthew Hulsizer’s PEAK6 Capital Management.

As you can see these stocks had an average of 31 hedge funds with bullish positions and the average amount invested in these stocks was $569 million. That figure was $619 million in RHI’s case. Five Below Inc (NASDAQ:FIVE) is the most popular stock in this table. On the other hand Hexcel Corporation (NYSE:HXL) is the least popular one with only 23 bullish hedge fund positions. Robert Half International Inc. (NYSE:RHI) is not the least popular stock in this group but hedge fund interest is still below average. This is a slightly negative signal and we’d rather spend our time researching stocks that hedge funds are piling on. Our calculations showed that top 20 most popular stocks among hedge funds returned 24.4% in 2019 through September 30th and outperformed the S&P 500 ETF (SPY) by 4 percentage points. Unfortunately RHI wasn’t nearly as popular as these 20 stocks (hedge fund sentiment was quite bearish); RHI investors were disappointed as the stock returned -1.8% during the third quarter and underperformed the market. If you are interested in investing in large cap stocks with huge upside potential, you should check out the top 20 most popular stocks among hedge funds as many of these stocks already outperformed the market so far in 2019.