“Since 2006, value stocks (IVE vs IVW) have underperformed 11 of the 13 calendar years and when they beat growth, it wasn’t by much. Cumulatively, through this week, it has been a 122% differential (up 52% for value vs up 174% for growth). This appears to be the longest and most severe drought for value investors since data collection began. It will go our way eventually as there are too many people paying far too much for today’s darlings, both public and private. Further, the ten-year yield of 2.5% (pre-tax) isn’t attractive nor is real estate. We believe the value part of the global equity market is the only place to earn solid risk adjusted returns and we believe those returns will be higher than normal,” said Vilas Fund in its Q1 investor letter. We aren’t sure whether value stocks outperform growth, but we follow hedge fund investor letters to understand where the markets and stocks might be going. This article will lay out and discuss the hedge fund and institutional investor sentiment towards Progenics Pharmaceuticals, Inc. (NASDAQ:PGNX).

Progenics Pharmaceuticals, Inc. (NASDAQ:PGNX) investors should be aware of a decrease in support from the world’s most elite money managers recently. Our calculations also showed that PGNX isn’t among the 30 most popular stocks among hedge funds (click for Q3 rankings and see the video below for Q2 rankings).

In today’s marketplace there are several methods stock market investors put to use to appraise their stock investments. Two of the most innovative methods are hedge fund and insider trading interest. Our experts have shown that, historically, those who follow the best picks of the best investment managers can outperform the broader indices by a very impressive amount (see the details here).

We leave no stone unturned when looking for the next great investment idea. For example Europe is set to become the world’s largest cannabis market, so we check out this European marijuana stock pitch. One of the most bullish analysts in America just put his money where his mouth is. He says, “I’m investing more today than I did back in early 2009.” So we check out his pitch. We read hedge fund investor letters and listen to stock pitches at hedge fund conferences. We also rely on the best performing hedge funds‘ buy/sell signals. We’re going to review the new hedge fund action encompassing Progenics Pharmaceuticals, Inc. (NASDAQ:PGNX).

What does smart money think about Progenics Pharmaceuticals, Inc. (NASDAQ:PGNX)?

At Q3’s end, a total of 12 of the hedge funds tracked by Insider Monkey were bullish on this stock, a change of -8% from the second quarter of 2019. The graph below displays the number of hedge funds with bullish position in PGNX over the last 17 quarters. With the smart money’s positions undergoing their usual ebb and flow, there exists a select group of key hedge fund managers who were adding to their stakes significantly (or already accumulated large positions). 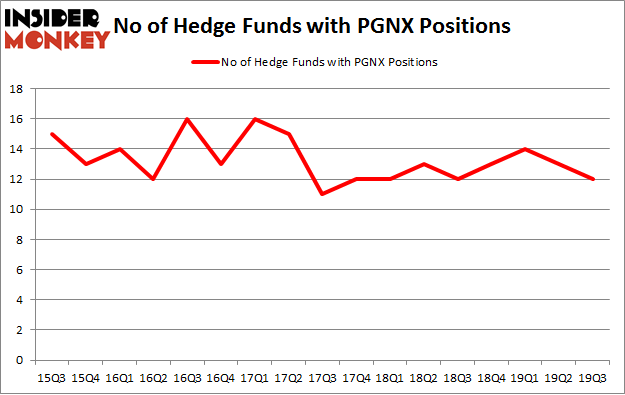 More specifically, Farallon Capital was the largest shareholder of Progenics Pharmaceuticals, Inc. (NASDAQ:PGNX), with a stake worth $37.2 million reported as of the end of September. Trailing Farallon Capital was Point72 Asset Management, which amassed a stake valued at $14.1 million. Broadfin Capital, Royce & Associates, and Highland Capital Management were also very fond of the stock, becoming one of the largest hedge fund holders of the company. In terms of the portfolio weights assigned to each position Broadfin Capital allocated the biggest weight to Progenics Pharmaceuticals, Inc. (NASDAQ:PGNX), around 1.48% of its 13F portfolio. Farallon Capital is also relatively very bullish on the stock, dishing out 0.38 percent of its 13F equity portfolio to PGNX.

Judging by the fact that Progenics Pharmaceuticals, Inc. (NASDAQ:PGNX) has experienced a decline in interest from the smart money, it’s easy to see that there were a few money managers who were dropping their full holdings heading into Q4. Intriguingly, Philip Hempleman’s Ardsley Partners dumped the largest position of all the hedgies watched by Insider Monkey, valued at about $4 million in stock, and Minhua Zhang’s Weld Capital Management was right behind this move, as the fund cut about $0.1 million worth. These moves are intriguing to say the least, as aggregate hedge fund interest dropped by 1 funds heading into Q4.

As you can see these stocks had an average of 9 hedge funds with bullish positions and the average amount invested in these stocks was $26 million. That figure was $70 million in PGNX’s case. The Cato Corporation (NYSE:CATO) is the most popular stock in this table. On the other hand CNB Financial Corporation (NASDAQ:CCNE) is the least popular one with only 3 bullish hedge fund positions. Progenics Pharmaceuticals, Inc. (NASDAQ:PGNX) is not the most popular stock in this group but hedge fund interest is still above average. This is a slightly positive signal but we’d rather spend our time researching stocks that hedge funds are piling on. Our calculations showed that top 20 most popular stocks among hedge funds returned 37.4% in 2019 through the end of November and outperformed the S&P 500 ETF (SPY) by 9.9 percentage points. Unfortunately PGNX wasn’t nearly as popular as these 20 stocks and hedge funds that were betting on PGNX were disappointed as the stock returned 3.2% during the fourth quarter (through the end of November) and underperformed the market. If you are interested in investing in large cap stocks with huge upside potential, you should check out the top 20 most popular stocks among hedge funds as many of these stocks already outperformed the market so far this year.