PPG Industries, Inc. (NYSE:PPG) investors should be aware of a decrease in hedge fund interest lately. Our calculations also showed that PPG isn’t among the 30 most popular stocks among hedge funds.

What does the smart money think about PPG Industries, Inc. (NYSE:PPG)? 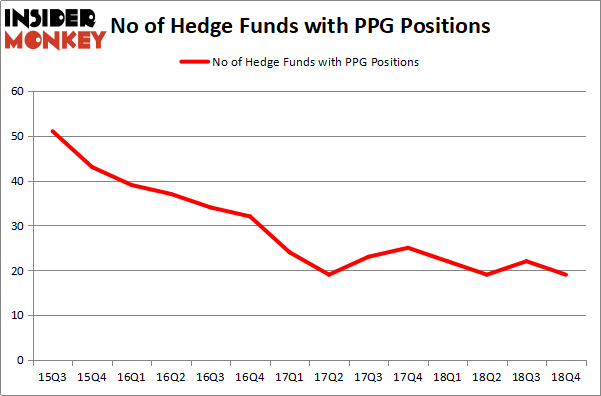 More specifically, Trian Partners was the largest shareholder of PPG Industries, Inc. (NYSE:PPG), with a stake worth $716.6 million reported as of the end of September. Trailing Trian Partners was Adage Capital Management, which amassed a stake valued at $45 million. Balyasny Asset Management, Scopus Asset Management, and Citadel Investment Group were also very fond of the stock, giving the stock large weights in their portfolios.

Because PPG Industries, Inc. (NYSE:PPG) has experienced declining sentiment from the aggregate hedge fund industry, it’s safe to say that there exists a select few hedge funds who sold off their entire stakes in the third quarter. It’s worth mentioning that John Brennan’s Sirios Capital Management dropped the largest position of all the hedgies monitored by Insider Monkey, worth close to $21.6 million in stock, and Israel Englander’s Millennium Management was right behind this move, as the fund dropped about $14 million worth. These moves are important to note, as total hedge fund interest fell by 3 funds in the third quarter.

Let’s check out hedge fund activity in other stocks – not necessarily in the same industry as PPG Industries, Inc. (NYSE:PPG) but similarly valued. We will take a look at Amphenol Corporation (NYSE:APH), Ferrari N.V. (NYSE:RACE), Equity Residential (NYSE:EQR), and Corning Incorporated (NYSE:GLW). All of these stocks’ market caps resemble PPG’s market cap.

As you can see these stocks had an average of 25.5 hedge funds with bullish positions and the average amount invested in these stocks was $520 million. That figure was $820 million in PPG’s case. Corning Incorporated (NYSE:GLW) is the most popular stock in this table. On the other hand Amphenol Corporation (NYSE:APH) is the least popular one with only 21 bullish hedge fund positions. Compared to these stocks PPG Industries, Inc. (NYSE:PPG) is even less popular than APH. Considering that hedge funds aren’t fond of this stock in relation to other companies analyzed in this article, it may be a good idea to analyze it in detail and understand why the smart money isn’t behind this stock. This isn’t necessarily bad news. Although it is possible that hedge funds may think the stock is overpriced and view the stock as a short candidate, they may not be very familiar with the bullish thesis.Our calculations showed that top 15 most popular stocks among hedge funds returned 19.7% through March 15th and outperformed the S&P 500 ETF (SPY) by 6.6 percentage points. Unfortunately PPG wasn’t in this group. Hedge funds that bet on PPG were disappointed as the stock returned 8.1% and underperformed the market. If you are interested in investing in large cap stocks, you should check out the top 15 hedge fund stocks as 13 of these outperformed the market.