Hedge Funds and other institutional investors have just completed filing their 13Fs with the Securities and Exchange Commission, revealing their equity portfolios as of the end of June. At Insider Monkey, we follow nearly 750 active hedge funds and notable investors and by analyzing their 13F filings, we can determine the stocks that they are collectively bullish on. One of their picks is Newmark Group, Inc. (NASDAQ:NMRK), so let’s take a closer look at the sentiment that surrounds it in the current quarter.

Newmark Group, Inc. (NASDAQ:NMRK) was in 16 hedge funds’ portfolios at the end of June. NMRK has experienced a decrease in enthusiasm from smart money in recent months. There were 24 hedge funds in our database with NMRK positions at the end of the previous quarter. Our calculations also showed that NMRK isn’t among the 30 most popular stocks among hedge funds (see the video below).

At Q2’s end, a total of 16 of the hedge funds tracked by Insider Monkey held long positions in this stock, a change of -33% from one quarter earlier. Below, you can check out the change in hedge fund sentiment towards NMRK over the last 16 quarters. With the smart money’s sentiment swirling, there exists an “upper tier” of noteworthy hedge fund managers who were adding to their holdings significantly (or already accumulated large positions). 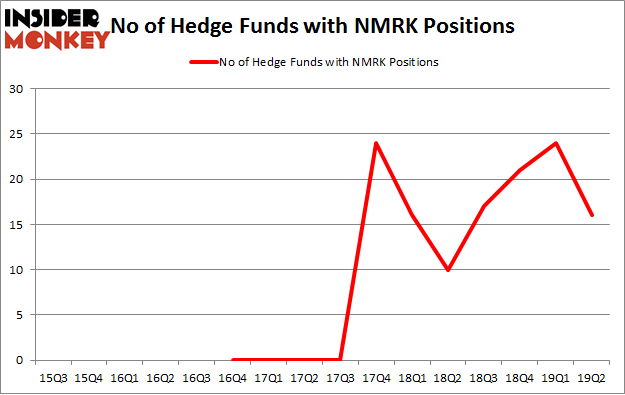 More specifically, EJF Capital was the largest shareholder of Newmark Group, Inc. (NASDAQ:NMRK), with a stake worth $27.3 million reported as of the end of March. Trailing EJF Capital was Sessa Capital, which amassed a stake valued at $21.2 million. Paulson & Co, Cardinal Capital, and Two Sigma Advisors were also very fond of the stock, giving the stock large weights in their portfolios.

Since Newmark Group, Inc. (NASDAQ:NMRK) has witnessed falling interest from the aggregate hedge fund industry, it’s easy to see that there lies a certain “tier” of money managers who sold off their full holdings last quarter. Intriguingly, Usman Waheed’s Strycker View Capital cut the largest position of the “upper crust” of funds watched by Insider Monkey, valued at close to $11.2 million in stock. Cliff Asness’s fund, AQR Capital Management, also dropped its stock, about $3.7 million worth. These transactions are intriguing to say the least, as aggregate hedge fund interest dropped by 8 funds last quarter.

As you can see these stocks had an average of 17.25 hedge funds with bullish positions and the average amount invested in these stocks was $174 million. That figure was $102 million in NMRK’s case. Delphi Technologies PLC (NYSE:DLPH) is the most popular stock in this table. On the other hand Redfin Corporation (NASDAQ:RDFN) is the least popular one with only 10 bullish hedge fund positions. Newmark Group, Inc. (NASDAQ:NMRK) is not the least popular stock in this group but hedge fund interest is still below average. Our calculations showed that top 20 most popular stocks among hedge funds returned 24.4% in 2019 through September 30th and outperformed the S&P 500 ETF (SPY) by 4 percentage points. A small number of hedge funds were also right about betting on NMRK, though not to the same extent, as the stock returned 2.1% during the third quarter and outperformed the market.