Is Newmark Group, Inc. (NASDAQ:NMRK) going to take off soon? Investors who are in the know are getting more optimistic. The number of long hedge fund bets moved up by 4 recently. Our calculations also showed that NMRK isn’t among the 30 most popular stocks among hedge funds. NMRK was in 21 hedge funds’ portfolios at the end of December. There were 17 hedge funds in our database with NMRK holdings at the end of the previous quarter.

In today’s marketplace there are a lot of tools shareholders employ to value their stock investments. Some of the most underrated tools are hedge fund and insider trading interest. Our experts have shown that, historically, those who follow the best picks of the elite hedge fund managers can trounce the market by a superb margin (see the details here).

What does the smart money think about Newmark Group, Inc. (NASDAQ:NMRK)? 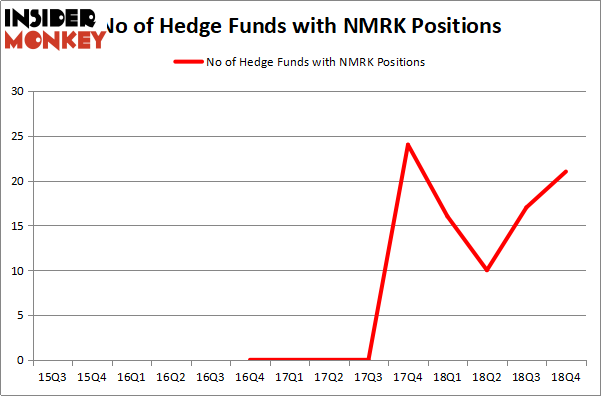 The largest stake in Newmark Group, Inc. (NASDAQ:NMRK) was held by Cardinal Capital, which reported holding $27.8 million worth of stock at the end of December. It was followed by EJF Capital with a $19.7 million position. Other investors bullish on the company included Paulson & Co, Strycker View Capital, and Gratia Capital.

As industrywide interest jumped, specific money managers have been driving this bullishness. Cardinal Capital, managed by Amy Minella, assembled the biggest position in Newmark Group, Inc. (NASDAQ:NMRK). Cardinal Capital had $27.8 million invested in the company at the end of the quarter. Usman Waheed’s Strycker View Capital also made a $11.5 million investment in the stock during the quarter. The following funds were also among the new NMRK investors: Cliff Asness’s AQR Capital Management, Anand Parekh’s Alyeska Investment Group, and Murray Stahl’s Horizon Asset Management.

Let’s go over hedge fund activity in other stocks – not necessarily in the same industry as Newmark Group, Inc. (NASDAQ:NMRK) but similarly valued. We will take a look at Waddell & Reed Financial, Inc. (NYSE:WDR), American Finance Trust, Inc. (NASDAQ:AFIN), The Medicines Company (NASDAQ:MDCO), and Office Depot Inc (NASDAQ:ODP). All of these stocks’ market caps are similar to NMRK’s market cap.

As you can see these stocks had an average of 15.75 hedge funds with bullish positions and the average amount invested in these stocks was $150 million. That figure was $127 million in NMRK’s case. Office Depot Inc (NASDAQ:ODP) is the most popular stock in this table. On the other hand American Finance Trust, Inc. (NASDAQ:AFIN) is the least popular one with only 3 bullish hedge fund positions. Newmark Group, Inc. (NASDAQ:NMRK) is not the most popular stock in this group but hedge fund interest is still above average. This is a slightly positive signal but we’d rather spend our time researching stocks that hedge funds are piling on. Our calculations showed that top 15 most popular stocks) among hedge funds returned 24.2% through April 22nd and outperformed the S&P 500 ETF (SPY) by more than 7 percentage points. Unfortunately NMRK wasn’t nearly as popular as these 15 stock and hedge funds that were betting on NMRK were disappointed as the stock returned 4.7% and underperformed the market. If you are interested in investing in large cap stocks with huge upside potential, you should check out the top 15 most popular stocks) among hedge funds as 13 of these stocks already outperformed the market this year.