How do you pick the next stock to invest in? One way would be to spend days of research browsing through thousands of publicly traded companies. However, an easier way is to look at the stocks that smart money investors are collectively bullish on. Hedge funds and other institutional investors usually invest large amounts of capital and have to conduct due diligence while choosing their next pick. They don’t always get it right, but, on average, their stock picks historically generated strong returns after adjusting for known risk factors. With this in mind, let’s take a look at the recent hedge fund activity surrounding NanoString Technologies Inc (NASDAQ:NSTG).

NanoString Technologies Inc (NASDAQ:NSTG) was in 18 hedge funds’ portfolios at the end of September. NSTG has seen a decrease in activity from the world’s largest hedge funds recently. There were 20 hedge funds in our database with NSTG positions at the end of the previous quarter. Our calculations also showed that NSTG isn’t among the 30 most popular stocks among hedge funds (click for Q3 rankings and see the video below for Q2 rankings).

In the 21st century investor’s toolkit there are a multitude of formulas shareholders can use to analyze publicly traded companies. Two of the best formulas are hedge fund and insider trading signals. Our experts have shown that, historically, those who follow the best picks of the top fund managers can trounce the S&P 500 by a significant margin (see the details here).

We leave no stone unturned when looking for the next great investment idea. For example Europe is set to become the world’s largest cannabis market, so we check out this European marijuana stock pitch. One of the most bullish analysts in America just put his money where his mouth is. He says, “I’m investing more today than I did back in early 2009.” So we check out his pitch. We read hedge fund investor letters and listen to stock pitches at hedge fund conferences. We also rely on the best performing hedge funds‘ buy/sell signals. We’re going to review the recent hedge fund action regarding NanoString Technologies Inc (NASDAQ:NSTG).

How have hedgies been trading NanoString Technologies Inc (NASDAQ:NSTG)?

At the end of the third quarter, a total of 18 of the hedge funds tracked by Insider Monkey were long this stock, a change of -10% from the second quarter of 2019. On the other hand, there were a total of 16 hedge funds with a bullish position in NSTG a year ago. With hedge funds’ capital changing hands, there exists a select group of noteworthy hedge fund managers who were boosting their holdings significantly (or already accumulated large positions). 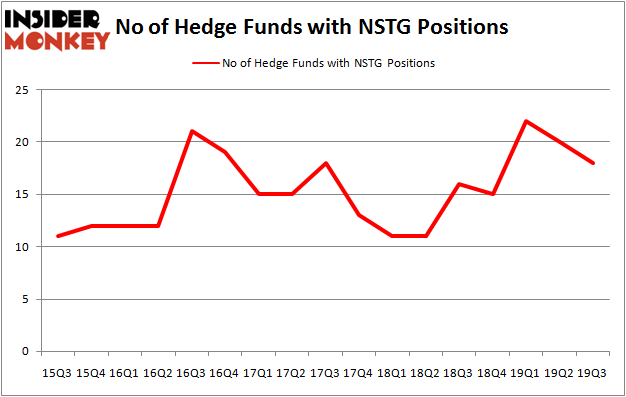 According to Insider Monkey’s hedge fund database, Eric Bannasch’s Cadian Capital has the biggest position in NanoString Technologies Inc (NASDAQ:NSTG), worth close to $53.5 million, amounting to 2.5% of its total 13F portfolio. On Cadian Capital’s heels is Pura Vida Investments, managed by Efrem Kamen, which holds a $18.9 million position; 6.6% of its 13F portfolio is allocated to the stock. Remaining members of the smart money with similar optimism comprise Brian Ashford-Russell and Tim Woolley’s Polar Capital, Anand Parekh’s Alyeska Investment Group and Israel Englander’s Millennium Management. In terms of the portfolio weights assigned to each position Pura Vida Investments allocated the biggest weight to NanoString Technologies Inc (NASDAQ:NSTG), around 6.61% of its 13F portfolio. Cadian Capital is also relatively very bullish on the stock, setting aside 2.54 percent of its 13F equity portfolio to NSTG.

Since NanoString Technologies Inc (NASDAQ:NSTG) has faced a decline in interest from hedge fund managers, it’s safe to say that there exists a select few hedge funds who sold off their entire stakes by the end of the third quarter. At the top of the heap, Farallon Capital cut the biggest stake of the “upper crust” of funds watched by Insider Monkey, worth close to $10.6 million in stock, and Steve Cohen’s Point72 Asset Management was right behind this move, as the fund sold off about $8.3 million worth. These bearish behaviors are important to note, as aggregate hedge fund interest was cut by 2 funds by the end of the third quarter.

As you can see these stocks had an average of 14.25 hedge funds with bullish positions and the average amount invested in these stocks was $126 million. That figure was $146 million in NSTG’s case. Realogy Holdings Corp (NYSE:RLGY) is the most popular stock in this table. On the other hand Delek Logistics Partners LP (NYSE:DKL) is the least popular one with only 1 bullish hedge fund positions. NanoString Technologies Inc (NASDAQ:NSTG) is not the most popular stock in this group but hedge fund interest is still above average. Our calculations showed that top 20 most popular stocks among hedge funds returned 37.4% in 2019 through the end of November and outperformed the S&P 500 ETF (SPY) by 9.9 percentage points. Hedge funds were also right about betting on NSTG as the stock returned 24.7% during the fourth quarter (through the end of November) and outperformed the market. Hedge funds were rewarded for their relative bullishness.