Before we spend countless hours researching a company, we’d like to analyze what insiders, hedge funds and billionaire investors think of the stock first. We would like to do so because our research has shown that the elite investors’ consensus returns have been exceptional. In the following paragraphs, we find out what the billionaire investors and hedge funds think of Lloyds Banking Group PLC (NYSE:LYG).

Is Lloyds Banking Group PLC (NYSE:LYG) a buy here? The best stock pickers are getting more optimistic. The number of long hedge fund bets went up by 5 recently. Our calculations also showed that LYG isn’t among the 30 most popular stocks among hedge funds. LYG was in 10 hedge funds’ portfolios at the end of December. There were 5 hedge funds in our database with LYG positions at the end of the previous quarter.

How have hedgies been trading Lloyds Banking Group PLC (NYSE:LYG)? 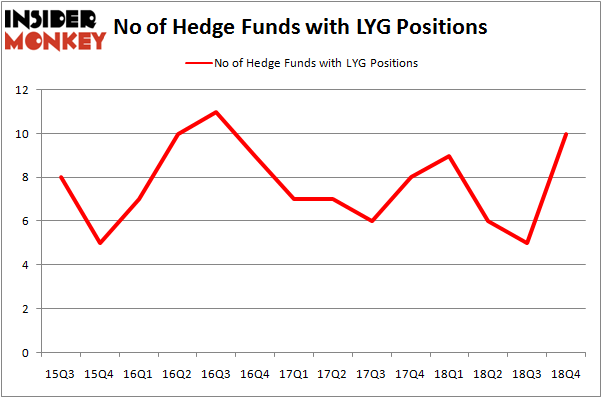 The largest stake in Lloyds Banking Group PLC (NYSE:LYG) was held by Renaissance Technologies, which reported holding $22.2 million worth of stock at the end of September. It was followed by Arrowstreet Capital with a $2.4 million position. Other investors bullish on the company included Segantii Capital, Two Sigma Advisors, and Citadel Investment Group.

With a general bullishness amongst the heavyweights, key hedge funds have been driving this bullishness. Arrowstreet Capital, managed by Peter Rathjens, Bruce Clarke and John Campbell, established the most outsized position in Lloyds Banking Group PLC (NYSE:LYG). Arrowstreet Capital had $2.4 million invested in the company at the end of the quarter. Simon Sadler’s Segantii Capital also initiated a $2.3 million position during the quarter. The other funds with brand new LYG positions are John Overdeck and David Siegel’s Two Sigma Advisors, David Costen Haley’s HBK Investments, and Matthew Tewksbury’s Stevens Capital Management.

As you can see these stocks had an average of 43.25 hedge funds with bullish positions and the average amount invested in these stocks was $2561 million. That figure was $30 million in LYG’s case. Allergan plc (NYSE:AGN) is the most popular stock in this table. On the other hand The Southern Company (NYSE:SO) is the least popular one with only 20 bullish hedge fund positions. Compared to these stocks Lloyds Banking Group PLC (NYSE:LYG) is even less popular than SO. However, five hedge funds saw an opportunity in Q4 and bet on the stock. Our calculations showed that top 15 most popular stocks among hedge funds returned 19.7% through March 15th and outperformed the S&P 500 ETF (SPY) by 6.6 percentage points. Hedge funds were also right about betting on LYG as the stock returned 33.2% and outperformed the market as well.