Is Jack in the Box Inc. (NASDAQ:JACK) a buy right now? Money managers are taking a bullish view. The number of long hedge fund positions improved by 3 recently. Our calculations also showed that JACK isn’t among the 30 most popular stocks among hedge funds.

We’re going to go over the recent hedge fund action regarding Jack in the Box Inc. (NASDAQ:JACK).

What have hedge funds been doing with Jack in the Box Inc. (NASDAQ:JACK)?

Heading into the first quarter of 2019, a total of 29 of the hedge funds tracked by Insider Monkey held long positions in this stock, a change of 12% from one quarter earlier. Below, you can check out the change in hedge fund sentiment towards JACK over the last 14 quarters. So, let’s review which hedge funds were among the top holders of the stock and which hedge funds were making big moves. 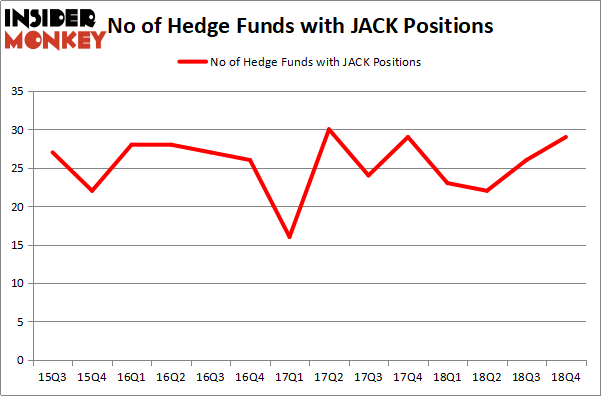 Consequently, key money managers were leading the bulls’ herd. 13D Management, managed by Kenneth Squire, assembled the largest position in Jack in the Box Inc. (NASDAQ:JACK). 13D Management had $12.4 million invested in the company at the end of the quarter. Guy Shahar’s DSAM Partners also made a $10.2 million investment in the stock during the quarter. The other funds with new positions in the stock are Clint Carlson’s Carlson Capital, Anthony Joseph Vaccarino’s North Fourth Asset Management, and Dmitry Balyasny’s Balyasny Asset Management.

Is Travelport Worldwide Ltd (TVPT) A Good Stock To Buy ?
Monthly Newsletter Strategy
Download a free copy of our newsletter and see the details inside!
Hedge Fund Resource Center
Related News
Jack in the Box Inc. (JACK): Are Hedge Funds Right About This Stock? Muscle Maker Grill: Fast Casual Chain That Has Lots of Potential Despite Industry Slowdown 32 Major Stories That You Should Read From the World of Finance Today 16 Healthiest Fast Food Menu Items and Restaurants: Should You Invest Healthful? Moe’s vs Chipotle vs Qdoba & Others: Where People Are Eating? The 5 Creepiest Spokesmen Ever: What Were These Companies Thinking? Here is What Hedge Funds Think About Jack in the Box Inc. (JACK) 18 Cute Tinder Bio Examples (Female) 20 Clever Bumble Bios for Guys 15 Most Physically Demanding Olympic Sports
Billionaire Hedge Funds