Gulfport Energy Corporation (NASDAQ:GPOR) investors should pay attention to an increase in enthusiasm from smart money in recent months. GPOR was in 22 hedge funds’ portfolios at the end of December. There were 20 hedge funds in our database with GPOR holdings at the end of the previous quarter. Our calculations also showed that GPOR isn’t among the 30 most popular stocks among hedge funds. 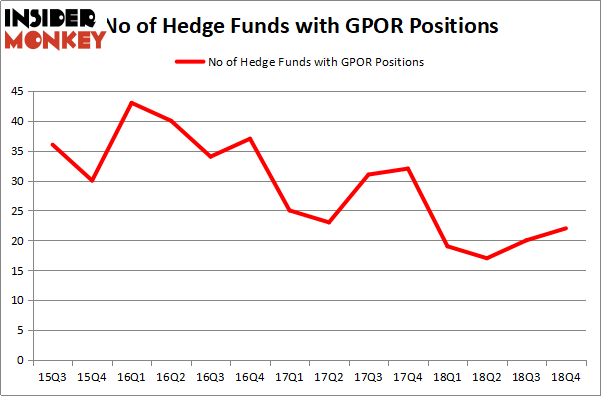 More specifically, Firefly Value Partners was the largest shareholder of Gulfport Energy Corporation (NASDAQ:GPOR), with a stake worth $63.7 million reported as of the end of December. Trailing Firefly Value Partners was Citadel Investment Group, which amassed a stake valued at $32.7 million. D E Shaw, Portolan Capital Management, and Arrowstreet Capital were also very fond of the stock, giving the stock large weights in their portfolios.

As one would reasonably expect, key hedge funds have been driving this bullishness. Firefly Value Partners, managed by Ryan Heslop and Ariel Warszawski, created the largest call position in Gulfport Energy Corporation (NASDAQ:GPOR). Firefly Value Partners had $28.5 million invested in the company at the end of the quarter. George McCabe’s Portolan Capital Management also made a $5.4 million investment in the stock during the quarter. The other funds with new positions in the stock are Paul Tudor Jones’s Tudor Investment Corp, Himanshu H. Shah’s Shah Capital Management, and Joe DiMenna’s ZWEIG DIMENNA PARTNERS.