Is Golar LNG Limited (NASDAQ:GLNG) a good investment right now? We check hedge fund and billionaire investor sentiment before delving into hours of research. Hedge funds spend millions of dollars on Ivy League graduates, expert networks, and get tips from investment bankers and industry insiders. Sure they sometimes fail miserably but historically their consensus stock picks outperformed the market after adjusting for known risk factors.

Golar LNG Limited (NASDAQ:GLNG) shareholders have witnessed a decrease in support from the world’s most elite money managers in recent months. Our calculations also showed that GLNG isn’t among the 30 most popular stocks among hedge funds.

What have hedge funds been doing with Golar LNG Limited (NASDAQ:GLNG)? 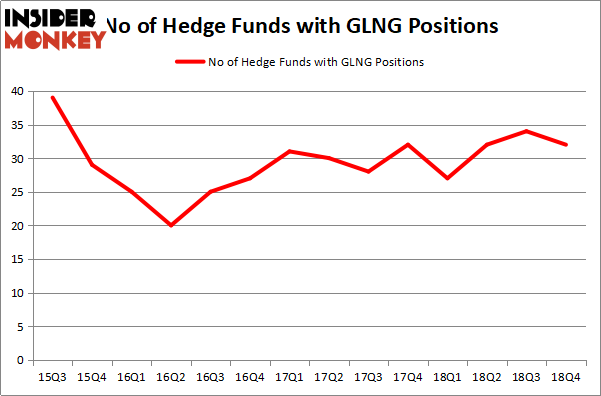 The largest stake in Golar LNG Limited (NASDAQ:GLNG) was held by Orbis Investment Management, which reported holding $194.2 million worth of stock at the end of December. It was followed by Luxor Capital Group with a $40.3 million position. Other investors bullish on the company included Renaissance Technologies, Pelham Capital, and Millennium Management.

Judging by the fact that Golar LNG Limited (NASDAQ:GLNG) has experienced a decline in interest from hedge fund managers, we can see that there were a few hedge funds who were dropping their positions entirely last quarter. At the top of the heap, Malcolm Fairbairn’s Ascend Capital said goodbye to the largest position of the “upper crust” of funds monitored by Insider Monkey, valued at an estimated $31 million in stock. Josh Donfeld and David Rogers’s fund, Castle Hook Partners, also cut its stock, about $14.1 million worth. These transactions are intriguing to say the least, as total hedge fund interest fell by 2 funds last quarter.