Here is What Hedge Funds Think About Globalstar, Inc. (GSAT)

It was a rough fourth quarter for many hedge funds, which were naturally unable to overcome the big dip in the broad market, as the S&P 500 fell by about 4.8% during 2018 and average hedge fund losing about 1%. The Russell 2000, composed of smaller companies, performed even worse, trailing the S&P by more than 6 percentage points, as investors fled less-known quantities for safe havens. Luckily hedge funds were shifting their holdings into large-cap stocks. The 20 most popular hedge fund stocks actually generated an average return of 24.4% during the first 9 months of 2019 and outperformed the S&P 500 ETF by 4 percentage points. We are done processing the latest 13f filings and in this article we will study how hedge fund sentiment towards Globalstar, Inc. (NYSE:GSAT) changed during the first quarter.

Is Globalstar, Inc. (NYSE:GSAT) a buy here? Hedge funds are getting less bullish. The number of bullish hedge fund bets shrunk by 2 lately. Our calculations also showed that GSAT isn’t among the 30 most popular stocks among hedge funds (see the video below). 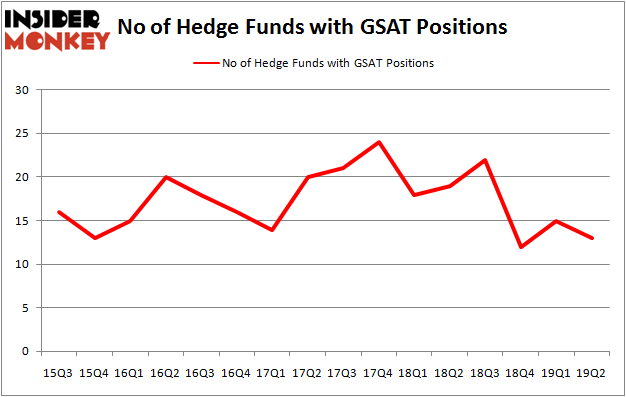 What does smart money think about Globalstar, Inc. (NYSE:GSAT)?

At Q2’s end, a total of 13 of the hedge funds tracked by Insider Monkey held long positions in this stock, a change of -13% from the first quarter of 2019. On the other hand, there were a total of 19 hedge funds with a bullish position in GSAT a year ago. With hedgies’ capital changing hands, there exists an “upper tier” of noteworthy hedge fund managers who were upping their stakes significantly (or already accumulated large positions).

When looking at the institutional investors followed by Insider Monkey, Jason Mudrick’s Mudrick Capital Management has the biggest position in Globalstar, Inc. (NYSE:GSAT), worth close to $55.4 million, accounting for 100% of its total 13F portfolio. On Mudrick Capital Management’s heels is Warlander Asset Management, managed by Eric Cole, which holds a $20.6 million position; 9.3% of its 13F portfolio is allocated to the stock. Remaining hedge funds and institutional investors that are bullish comprise Michael Johnston’s Steelhead Partners, Ari Zweiman’s 683 Capital Partners and Kenneth Mario Garschina’s Mason Capital Management.

Due to the fact that Globalstar, Inc. (NYSE:GSAT) has faced bearish sentiment from the smart money, it’s easy to see that there were a few fund managers that elected to cut their full holdings by the end of the second quarter. Interestingly, Carl Tiedemann and Michael Tiedemann’s TIG Advisors dropped the largest position of the “upper crust” of funds monitored by Insider Monkey, totaling an estimated $1.1 million in stock. Renaissance Technologies, also dumped its stock, about $0.3 million worth. These moves are important to note, as total hedge fund interest fell by 2 funds by the end of the second quarter.

Let’s now take a look at hedge fund activity in other stocks – not necessarily in the same industry as Globalstar, Inc. (NYSE:GSAT) but similarly valued. We will take a look at National Presto Industries Inc. (NYSE:NPK), Ready Capital Corporation (NYSE:RC), Uxin Limited (NASDAQ:UXIN), and Tucows Inc. (NASDAQ:TCX). This group of stocks’ market valuations are similar to GSAT’s market valuation.