After several tireless days we have finished crunching the numbers from nearly 750 13F filings issued by the elite hedge funds and other investment firms that we track at Insider Monkey, which disclosed those firms’ equity portfolios as of December 31. The results of that effort will be put on display in this article, as we share valuable insight into the smart money sentiment towards Delek US Holdings, Inc. (NYSE:DK).

Delek US Holdings, Inc. (NYSE:DK) was in 27 hedge funds’ portfolios at the end of December. DK has experienced a decrease in hedge fund sentiment recently. There were 31 hedge funds in our database with DK holdings at the end of the previous quarter. Our calculations also showed that dk isn’t among the 30 most popular stocks among hedge funds.

What does the smart money think about Delek US Holdings, Inc. (NYSE:DK)?

At Q4’s end, a total of 27 of the hedge funds tracked by Insider Monkey held long positions in this stock, a change of -13% from the previous quarter. By comparison, 21 hedge funds held shares or bullish call options in DK a year ago. With hedge funds’ positions undergoing their usual ebb and flow, there exists an “upper tier” of notable hedge fund managers who were upping their holdings significantly (or already accumulated large positions). 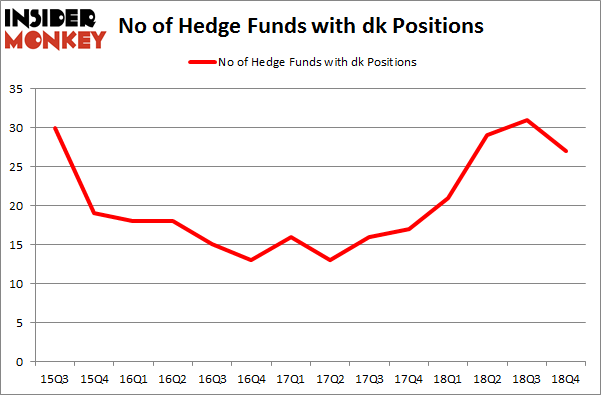 The largest stake in Delek US Holdings, Inc. (NYSE:DK) was held by Point72 Asset Management, which reported holding $55.4 million worth of stock at the end of September. It was followed by Millennium Management with a $46.5 million position. Other investors bullish on the company included Fisher Asset Management, Castle Hook Partners, and SIR Capital Management.

Seeing as Delek US Holdings, Inc. (NYSE:DK) has faced declining sentiment from the smart money, we can see that there exists a select few money managers that elected to cut their full holdings heading into Q3. At the top of the heap, Till Bechtolsheimer’s Arosa Capital Management sold off the largest position of the 700 funds tracked by Insider Monkey, totaling about $21.2 million in stock. Jim Simons’s fund, Renaissance Technologies, also sold off its stock, about $19.4 million worth. These transactions are interesting, as total hedge fund interest fell by 4 funds heading into Q3.

As you can see these stocks had an average of 11 hedge funds with bullish positions and the average amount invested in these stocks was $138 million. That figure was $234 million in DK’s case. AMN Healthcare Services Inc (NYSE:AMN) is the most popular stock in this table. On the other hand Ormat Technologies, Inc. (NYSE:ORA) is the least popular one with only 5 bullish hedge fund positions. Compared to these stocks Delek US Holdings, Inc. (NYSE:DK) is more popular among hedge funds. Our calculations showed that top 15 most popular stocks) among hedge funds returned 24.2% through April 22nd and outperformed the S&P 500 ETF (SPY) by more than 7 percentage points. Hedge funds were also right about betting on DK, though not to the same extent, as the stock returned 18.4% and outperformed the market as well.