The 700+ hedge funds and famous money managers tracked by Insider Monkey have already compiled and submitted their 13F filings for the second quarter, which unveil their equity positions as of June 28. We went through these filings, fixed typos and other more significant errors and identified the changes in hedge fund portfolios. Our extensive review of these public filings is finally over, so this article is set to reveal the smart money sentiment towards CNH Industrial NV (NYSE:CNHI).

Is CNH Industrial NV (NYSE:CNHI) a healthy stock for your portfolio? The best stock pickers are taking a pessimistic view. The number of long hedge fund bets went down by 9 recently. Our calculations also showed that CNHI isn’t among the 30 most popular stocks among hedge funds.

If you’d ask most stock holders, hedge funds are seen as worthless, old investment tools of the past. While there are over 8000 funds trading today, We hone in on the crème de la crème of this group, about 750 funds. Most estimates calculate that this group of people manage the lion’s share of the hedge fund industry’s total capital, and by shadowing their best investments, Insider Monkey has deciphered a few investment strategies that have historically outperformed the market. Insider Monkey’s flagship hedge fund strategy outpaced the S&P 500 index by around 5 percentage points per annum since its inception in May 2014. We were able to generate large returns even by identifying short candidates. Our portfolio of short stocks lost 25.7% since February 2017 (through September 30th) even though the market was up more than 33% during the same period. We just shared a list of 10 short targets in our latest quarterly update .

Unlike this former hedge fund manager who is convinced Dow will soar past 40000, our long-short investment strategy doesn’t rely on bull markets to deliver double digit returns. We only rely on hedge fund buy/sell signals. Let’s take a look at the new hedge fund action surrounding CNH Industrial NV (NYSE:CNHI).

How have hedgies been trading CNH Industrial NV (NYSE:CNHI)?

At the end of the second quarter, a total of 14 of the hedge funds tracked by Insider Monkey held long positions in this stock, a change of -39% from one quarter earlier. Below, you can check out the change in hedge fund sentiment towards CNHI over the last 16 quarters. With hedge funds’ sentiment swirling, there exists a select group of notable hedge fund managers who were increasing their holdings meaningfully (or already accumulated large positions). 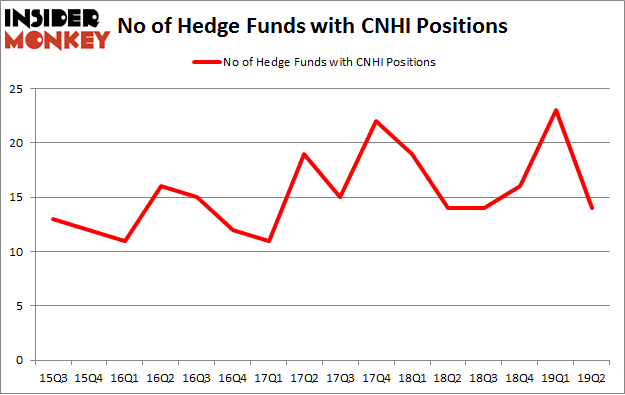 More specifically, GAMCO Investors was the largest shareholder of CNH Industrial NV (NYSE:CNHI), with a stake worth $128.2 million reported as of the end of March. Trailing GAMCO Investors was Arrowstreet Capital, which amassed a stake valued at $98.5 million. Southeastern Asset Management, Millennium Management, and Citadel Investment Group were also very fond of the stock, giving the stock large weights in their portfolios.

Because CNH Industrial NV (NYSE:CNHI) has faced bearish sentiment from the entirety of the hedge funds we track, it’s safe to say that there exists a select few money managers that elected to cut their full holdings by the end of the second quarter. Interestingly, Peter Muller’s PDT Partners said goodbye to the largest position of all the hedgies monitored by Insider Monkey, valued at close to $22.5 million in stock. Clint Carlson’s fund, Carlson Capital, also sold off its stock, about $16.3 million worth. These moves are important to note, as total hedge fund interest was cut by 9 funds by the end of the second quarter.

As you can see these stocks had an average of 13.25 hedge funds with bullish positions and the average amount invested in these stocks was $144 million. That figure was $354 million in CNHI’s case. Quest Diagnostics Incorporated (NYSE:DGX) is the most popular stock in this table. On the other hand Canopy Growth Corporation (NYSE:CGC) is the least popular one with only 4 bullish hedge fund positions. CNH Industrial NV (NYSE:CNHI) is not the most popular stock in this group but hedge fund interest is still above average. This is a slightly positive signal but we’d rather spend our time researching stocks that hedge funds are piling on. Our calculations showed that top 20 most popular stocks among hedge funds returned 24.4% in 2019 through September 30th and outperformed the S&P 500 ETF (SPY) by 4 percentage points. Unfortunately CNHI wasn’t nearly as popular as these 20 stocks and hedge funds that were betting on CNHI were disappointed as the stock returned -1.3% during the third quarter and underperformed the market. If you are interested in investing in large cap stocks with huge upside potential, you should check out the top 20 most popular stocks (see the video below) among hedge funds as many of these stocks already outperformed the market so far this year.