Here is What Hedge Funds Think About Carnival plc (NYSE:CUK)

Hedge Funds and other institutional investors have just completed filing their 13Fs with the Securities and Exchange Commission, revealing their equity portfolios as of the end of December. At Insider Monkey, we follow nearly 750 active hedge funds and notable investors and by analyzing their 13F filings, we can determine the stocks that they are collectively bullish on. One of their picks is Carnival plc (NYSE:CUK), so let’s take a closer look at the sentiment that surrounds it in the current quarter.

Carnival plc (NYSE:CUK) shares haven’t seen a lot of action during the third quarter. Overall, hedge fund sentiment was unchanged. The stock was in 8 hedge funds’ portfolios at the end of the fourth quarter of 2018. The level and the change in hedge fund popularity aren’t the only variables you need to analyze to decipher hedge funds’ perspectives. A stock may witness a boost in popularity but it may still be less popular than similarly priced stocks. That’s why at the end of this article we will examine companies such as Baxter International Inc. (NYSE:BAX), Aon plc (NYSE:AON), and Altaba Inc. (NASDAQ:AABA) to gather more data points.

How have hedgies been trading Carnival plc (NYSE:CUK)? 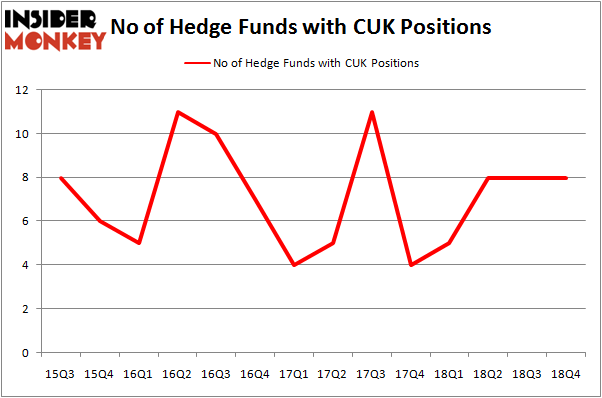 The largest stake in Carnival plc (NYSE:CUK) was held by Renaissance Technologies, which reported holding $33.9 million worth of stock at the end of September. It was followed by Marshall Wace LLP with a $20.9 million position. Other investors bullish on the company included Two Sigma Advisors, Arrowstreet Capital, and D E Shaw.

Seeing as Carnival plc (NYSE:CUK) has experienced bearish sentiment from the smart money, it’s easy to see that there was a specific group of fund managers that elected to cut their entire stakes in the third quarter. It’s worth mentioning that Mike Vranos’s Ellington dumped the biggest position of all the hedgies tracked by Insider Monkey, comprising about $0.3 million in stock, and Israel Englander’s Millennium Management was right behind this move, as the fund cut about $0.2 million worth. These bearish behaviors are intriguing to say the least, as total hedge fund interest stayed the same (this is a bearish signal in our experience).

As you can see these stocks had an average of 47 hedge funds with bullish positions and the average amount invested in these stocks was $4939 million. That figure was $85 million in CUK’s case. Altaba Inc. (NASDAQ:AABA) is the most popular stock in this table. On the other hand Baxter International Inc. (NYSE:BAX) is the least popular one with only 36 bullish hedge fund positions. Compared to these stocks Carnival plc (NYSE:CUK) is even less popular than BAX. Our calculations showed that top 15 most popular stocks among hedge funds returned 19.7% through March 15th and outperformed the S&P 500 ETF (SPY) by 6.6 percentage points. A few hedge funds were also right about betting on CUK, though not to the same extent, as the stock returned 15.4% and outperformed the market as well.

Were Hedge Funds Right About Ecolab Inc. (ECL)?
Monthly Newsletter Strategy
Download a free copy of our newsletter and see the details inside!
Hedge Fund Resource Center
Related News
Cluster of Insider Buying at Clinical-Stage Vaccine Company, Massive Insider Selling at Analog Chip Giant, Plus Other Insider Trading Is Carnival plc (ADR) (CUK) Worthy of Your Portfolio? Hedge Funds’ Favorite Stocks With Low Price-to-Cash-Flow Ratios Hedge Funds Are Crazy About Carnival plc (ADR) (CUK) What Has Insiders Of These Companies Unloading Their Shares? One Indicator Orbitz Worldwide, Inc. (OWW) Investors Should Pay Attention To Cedar Fair, L.P. (FUN): Insiders and Hedge Funds Aren’t Crazy About It Ten of the Most Common Addictions 13 African Countries with the Largest White Population in 2018 6 Causes of Human Trafficking in Africa, India, and US
Billionaire Hedge Funds