Here is What Hedge Funds Think About Arcosa, Inc. (ACA)

How do you pick the next stock to invest in? One way would be to spend days of research browsing through thousands of publicly traded companies. However, an easier way is to look at the stocks that smart money investors are collectively bullish on. Hedge funds and other institutional investors usually invest large amounts of capital and have to conduct due diligence while choosing their next pick. They don’t always get it right, but, on average, their stock picks historically generated strong returns after adjusting for known risk factors. With this in mind, let’s take a look at the recent hedge fund activity surrounding Arcosa, Inc. (NYSE:ACA).

Arcosa, Inc. (NYSE:ACA) shareholders have witnessed a decrease in enthusiasm from smart money in recent months. ACA was in 24 hedge funds’ portfolios at the end of June. There were 25 hedge funds in our database with ACA positions at the end of the previous quarter. Our calculations also showed that ACA isn’t among the 30 most popular stocks among hedge funds (see the video below). 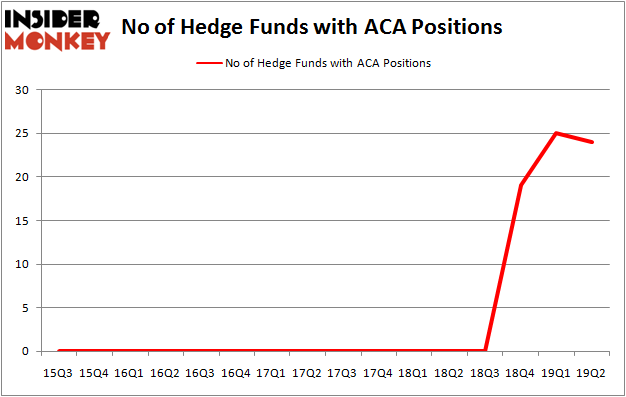 Unlike former hedge manager, Dr. Steve Sjuggerud, who is convinced Dow will soar past 40000, our long-short investment strategy doesn’t rely on bull markets to deliver double digit returns. We only rely on hedge fund buy/sell signals. Let’s take a look at the fresh hedge fund action regarding Arcosa, Inc. (NYSE:ACA).

What does smart money think about Arcosa, Inc. (NYSE:ACA)?

At Q2’s end, a total of 24 of the hedge funds tracked by Insider Monkey held long positions in this stock, a change of -4% from the previous quarter. The graph below displays the number of hedge funds with bullish position in ACA over the last 16 quarters. With hedgies’ positions undergoing their usual ebb and flow, there exists a select group of notable hedge fund managers who were adding to their holdings meaningfully (or already accumulated large positions).

More specifically, ValueAct Capital was the largest shareholder of Arcosa, Inc. (NYSE:ACA), with a stake worth $159.6 million reported as of the end of March. Trailing ValueAct Capital was Royce & Associates, which amassed a stake valued at $40.8 million. Yacktman Asset Management, Ancora Advisors, and Winton Capital Management were also very fond of the stock, giving the stock large weights in their portfolios.

Because Arcosa, Inc. (NYSE:ACA) has faced falling interest from hedge fund managers, logic holds that there were a few fund managers that decided to sell off their full holdings in the second quarter. Intriguingly, Noam Gottesman’s GLG Partners cut the biggest position of the 750 funds watched by Insider Monkey, comprising close to $2.1 million in stock, and David Costen Haley’s HBK Investments was right behind this move, as the fund dumped about $1.1 million worth. These transactions are interesting, as aggregate hedge fund interest dropped by 1 funds in the second quarter.

As you can see these stocks had an average of 22.75 hedge funds with bullish positions and the average amount invested in these stocks was $222 million. That figure was $329 million in ACA’s case. Cott Corporation (NYSE:COT) is the most popular stock in this table. On the other hand 21Vianet Group Inc (NASDAQ:VNET) is the least popular one with only 17 bullish hedge fund positions. Arcosa, Inc. (NYSE:ACA) is not the most popular stock in this group but hedge fund interest is still above average. This is a slightly positive signal but we’d rather spend our time researching stocks that hedge funds are piling on. Our calculations showed that top 20 most popular stocks among hedge funds returned 24.4% in 2019 through September 30th and outperformed the S&P 500 ETF (SPY) by 4 percentage points. Unfortunately ACA wasn’t nearly as popular as these 20 stocks and hedge funds that were betting on ACA were disappointed as the stock returned -9% during the third quarter and underperformed the market. If you are interested in investing in large cap stocks with huge upside potential, you should check out the top 20 most popular stocks among hedge funds as many of these stocks already outperformed the market so far this year.

Were Hedge Funds Right About Cutting Tech Data Corporation (TECD)?
Monthly Newsletter Strategy
Download a free copy of our newsletter and see the details inside!
Hedge Fund Resource Center
Related News
Hedge Funds Have Never Been This Bullish On Arcosa, Inc. (ACA) 11 Largest Auto Insurance Companies In The US In 2019 10 Poorest Cities in America in 2019 8 Lowest Tar and Nicotine Cigarette Brands in 2019
Billionaire Hedge Funds