We at Insider Monkey have gone over 738 13F filings that hedge funds and famous value investors are required to file by the SEC. The 13F filings show the funds’ and investors’ portfolio positions as of March 31st. In this article we look at what those investors think of Antares Pharma Inc (NASDAQ:ATRS).

Is Antares Pharma Inc (NASDAQ:ATRS) a bargain? Prominent investors are getting more bullish. The number of long hedge fund positions increased by 2 lately. Our calculations also showed that atrs isn’t among the 30 most popular stocks among hedge funds. ATRS was in 12 hedge funds’ portfolios at the end of March. There were 10 hedge funds in our database with ATRS holdings at the end of the previous quarter.

How have hedgies been trading Antares Pharma Inc (NASDAQ:ATRS)? 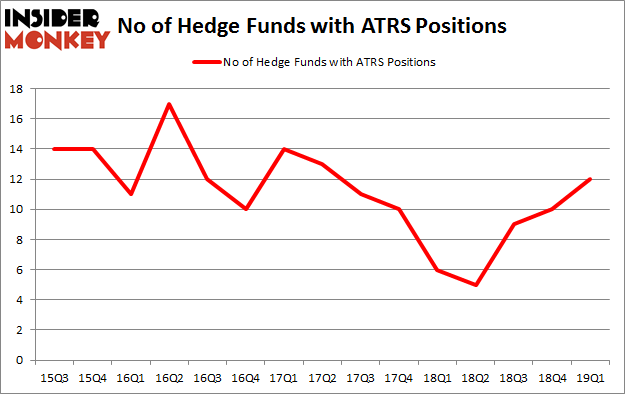 More specifically, Armistice Capital was the largest shareholder of Antares Pharma Inc (NASDAQ:ATRS), with a stake worth $31.2 million reported as of the end of March. Trailing Armistice Capital was Broadfin Capital, which amassed a stake valued at $8 million. Marshall Wace LLP, Renaissance Technologies, and Two Sigma Advisors were also very fond of the stock, giving the stock large weights in their portfolios.

With a general bullishness amongst the heavyweights, some big names have been driving this bullishness. Renaissance Technologies, managed by Jim Simons, assembled the largest position in Antares Pharma Inc (NASDAQ:ATRS). Renaissance Technologies had $1.3 million invested in the company at the end of the quarter. William Harnisch’s Peconic Partners LLC also made a $0.2 million investment in the stock during the quarter. The other funds with brand new ATRS positions are David Harding’s Winton Capital Management and Ken Griffin’s Citadel Investment Group.

As you can see these stocks had an average of 15.25 hedge funds with bullish positions and the average amount invested in these stocks was $117 million. That figure was $47 million in ATRS’s case. Prothena Corporation plc (NASDAQ:PRTA) is the most popular stock in this table. On the other hand CONSOL Coal Resources LP (NYSE:CCR) is the least popular one with only 5 bullish hedge fund positions. Antares Pharma Inc (NASDAQ:ATRS) is not the least popular stock in this group but hedge fund interest is still below average. This is a slightly negative signal and we’d rather spend our time researching stocks that hedge funds are piling on. Our calculations showed that top 20 most popular stocks among hedge funds returned 6.2% in Q2 through June 19th and outperformed the S&P 500 ETF (SPY) by nearly 3 percentage points. Unfortunately ATRS wasn’t nearly as popular as these 20 stocks (hedge fund sentiment was quite bearish); ATRS investors were disappointed as the stock returned -0.7% during the same time period and underperformed the market. If you are interested in investing in large cap stocks with huge upside potential, you should check out the top 20 most popular stocks among hedge funds as 13 of these stocks already outperformed the market so far in Q2.