Before we spend days researching a stock idea we’d like to take a look at how hedge funds and billionaire investors recently traded that stock. S&P 500 Index ETF (SPY) lost 13.5% in the fourth quarter. Seven out of 11 industry groups in the S&P 500 Index were down more than 20% from their 52-week highs at the trough of the stock market crash. The average return of a randomly picked stock in the index was even worse. This means you (or a monkey throwing a dart) have less than an even chance of beating the market by randomly picking a stock. On the other hand, the top 15 most popular S&P 500 stocks among hedge funds not only recouped their Q4 losses but also outperformed the index by more than 3 percentage points. In this article, we will take a look at what hedge funds think about American Airlines Group Inc (NASDAQ:AAL).

Is American Airlines Group Inc (NASDAQ:AAL) a buy here? Money managers are turning bullish. The number of bullish hedge fund bets increased by 6 in recent months. Our calculations also showed that AAL isn’t among the 30 most popular stocks among hedge funds.

At Q4’s end, a total of 45 of the hedge funds tracked by Insider Monkey were bullish on this stock, a change of 15% from the previous quarter. The graph below displays the number of hedge funds with bullish position in AAL over the last 14 quarters. With the smart money’s sentiment swirling, there exists a select group of noteworthy hedge fund managers who were increasing their holdings meaningfully (or already accumulated large positions). 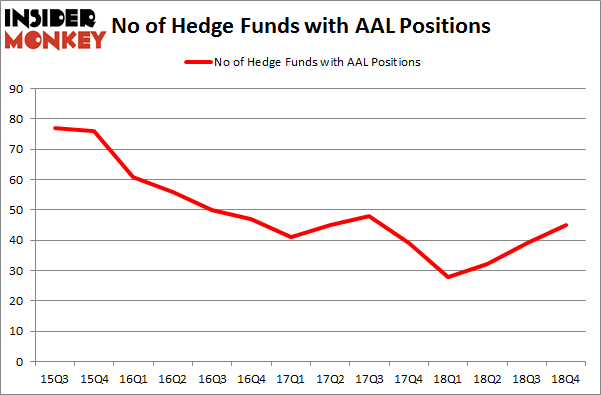 The largest stake in American Airlines Group Inc (NASDAQ:AAL) was held by Berkshire Hathaway, which reported holding $1403.2 million worth of stock at the end of September. It was followed by Lansdowne Partners with a $260.7 million position. Other investors bullish on the company included Viking Global, Citadel Investment Group, and Masters Capital Management.

As aggregate interest increased, key hedge funds have been driving this bullishness. Viking Global, managed by Andreas Halvorsen, assembled the biggest position in American Airlines Group Inc (NASDAQ:AAL). Viking Global had $184.9 million invested in the company at the end of the quarter. Robert Polak’s Anchor Bolt Capital also made a $57.9 million investment in the stock during the quarter. The other funds with brand new AAL positions are Stanley Druckenmiller’s Duquesne Capital, John Tompkins’s Tyvor Capital, and Benjamin A. Smith’s Laurion Capital Management.

As you can see these stocks had an average of 23 hedge funds with bullish positions and the average amount invested in these stocks was $669 million. That figure was $2297 million in AAL’s case. Ameriprise Financial, Inc. (NYSE:AMP) is the most popular stock in this table. On the other hand Plains All American Pipeline, L.P. (NYSE:PAA) is the least popular one with only 8 bullish hedge fund positions. Compared to these stocks American Airlines Group Inc (NASDAQ:AAL) is more popular among hedge funds. Considering that hedge funds are fond of this stock in relation to its market cap peers, it may be a good idea to analyze it in detail and potentially include it in your portfolio. Our calculations showed that top 15 most popular stocks among hedge funds returned 19.7% through March 15th and outperformed the S&P 500 ETF (SPY) by 6.6 percentage points. Unfortunately AAL wasn’t in this group. Hedge funds that bet on AAL were disappointed as the stock lost 1.9% and underperformed the market. If you are interested in investing in large cap stocks, you should check out the top 15 hedge fund stocks as 13 of these outperformed the market.