Here is What Hedge Funds Think About Ameren Corp (AEE)

Is Ameren Corp (NYSE:AEE) a good place to invest some of your money right now? We can gain invaluable insight to help us answer that question by studying the investment trends of top investors, who employ world-class Ivy League graduates, who are given immense resources and industry contacts to put their financial expertise to work. The top picks of these firms have historically outperformed the market when we account for known risk factors, making them very valuable investment ideas.

Ameren Corp (NYSE:AEE) has experienced a decrease in hedge fund interest recently. There were 15 hedge funds in our database with AEE positions at the end of the previous quarter. At the end of this article we will also compare AEE to other stocks including Santander Mexico Fincl Gp SAB deCV (ADR) (NYSE:BSMX), Silver Wheaton Corp. (USA) (NYSE:SLW), and Global Payments Inc (NYSE:GPN) to get a better sense of its popularity.

With all of this in mind, we’re going to go over the new action encompassing Ameren Corp (NYSE:AEE).

At the end of the third quarter, a total of 12 of the hedge funds tracked by Insider Monkey held long positions in this stock, a drop of 20% from the second quarter of 2016. Below, you can check out the change in hedge fund sentiment towards AEE over the last 5 quarters. With the smart money’s sentiment swirling, there exists a few key hedge fund managers who were increasing their stakes considerably (or already accumulated large positions). 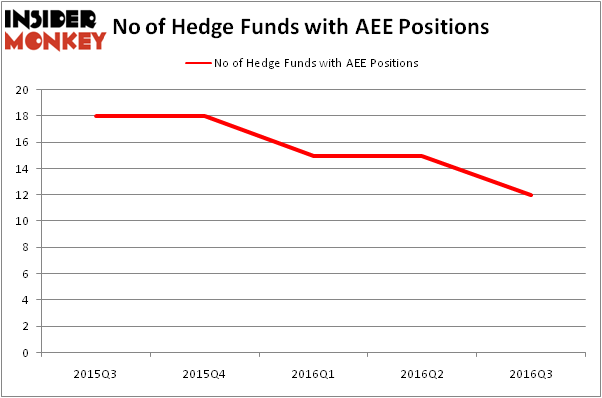 According to publicly available hedge fund and institutional investor holdings data compiled by Insider Monkey, AQR Capital Management, led by Cliff Asness, holds the number one position in Ameren Corp (NYSE:AEE). AQR Capital Management has a $273 million position in the stock, comprising 0.4% of its 13F portfolio. Sitting at the No. 2 spot is Renaissance Technologies, founded by Jim Simons, which holds a $62.7 million position; 0.1% of its 13F portfolio is allocated to the stock. Other peers that hold long positions contain Peter Rathjens, Bruce Clarke and John Campbell’s Arrowstreet Capital, John Overdeck and David Siegel’s Two Sigma Advisors and D. E. Shaw’s D E Shaw. We should note that none of these hedge funds are among our list of the 100 best performing hedge funds which is based on the performance of their 13F long positions in non-microcap stocks.

Seeing as Ameren Corp (NYSE:AEE) has weathered a decline in interest from the entirety of the hedge funds we track, we can see that there were a few hedgies that slashed their positions entirely last quarter. Intriguingly, Jos Shaver’s Electron Capital Partners cashed in the largest stake of all the hedgies followed by Insider Monkey, valued at an estimated $16.6 million in stock, and Jonathan Barrett and Paul Segal’s Luminus Management was right behind this move, as the fund dropped about $16.4 million worth of shares.

As you can see these stocks had an average of 20 hedge funds with bullish positions and the average amount invested in these stocks was $329 million. That figure was $432 million in AEE’s case. Silver Wheaton Corp. (USA) (NYSE:SLW) is the most popular stock in this table. On the other hand Grupo Financero Sntdr Mxco SAB de CV ADR (NYSE:BSMX) is the least popular one with only 9 bullish hedge fund positions. Ameren Corp (NYSE:AEE) is not the least popular stock in this group but hedge fund interest is still below average. This is a slightly negative signal and we’d rather spend our time researching stocks that hedge funds are piling on. In this regard SLW might be a better candidate to consider taking a long position in.