Is Allison Transmission Holdings Inc (NYSE:ALSN) undervalued? The smart money is taking a bullish view. The number of long hedge fund bets moved up by 2 lately. Our calculations also showed that ALSN isn’t among the 30 most popular stocks among hedge funds.

What have hedge funds been doing with Allison Transmission Holdings Inc (NYSE:ALSN)? 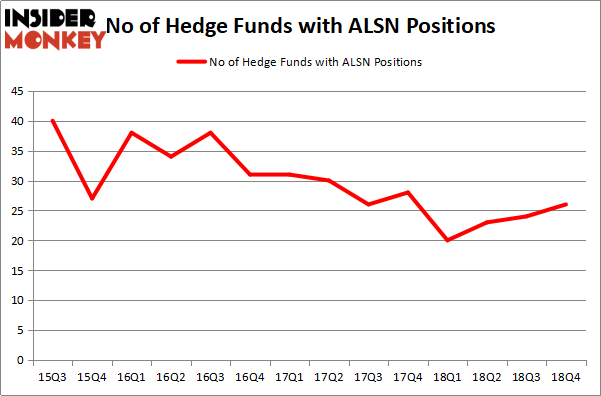 As one would reasonably expect, specific money managers were leading the bulls’ herd. Carlson Capital, managed by Clint Carlson, assembled the most outsized position in Allison Transmission Holdings Inc (NYSE:ALSN). Carlson Capital had $17.5 million invested in the company at the end of the quarter. Matthew Hulsizer’s PEAK6 Capital Management also made a $0.9 million investment in the stock during the quarter. The other funds with brand new ALSN positions are Brandon Haley’s Holocene Advisors, Ronald Hua’s Qtron Investments, and Minhua Zhang’s Weld Capital Management.

As you can see these stocks had an average of 23.5 hedge funds with bullish positions and the average amount invested in these stocks was $360 million. That figure was $1225 million in ALSN’s case. Masimo Corporation (NASDAQ:MASI) is the most popular stock in this table. On the other hand American Campus Communities, Inc. (NYSE:ACC) is the least popular one with only 16 bullish hedge fund positions. Allison Transmission Holdings Inc (NYSE:ALSN) is not the most popular stock in this group but hedge fund interest is still above average. This is a slightly positive signal but we’d rather spend our time researching stocks that hedge funds are piling on. Our calculations showed that top 15 most popular stocks among hedge funds returned 21.3% through April 8th and outperformed the S&P 500 ETF (SPY) by more than 5 percentage points. Unfortunately ALSN wasn’t in this group. Hedge funds that bet on ALSN were disappointed as the stock returned 7.3% and underperformed the market. If you are interested in investing in large cap stocks, you should check out the top 15 hedge fund stocks as 12 of these outperformed the market.