Here is What Hedge Funds Think About Aaron’s, Inc. (AAN)

Is Aaron’s, Inc. (NYSE:AAN) a good stock to buy right now? We at Insider Monkey like to examine what billionaires and hedge funds think of a company before doing days of research on it. Given their 2 and 20 payment structure, hedge funds have more incentives and resources than the average investor. The funds have access to expert networks and get tips from industry insiders. They also have numerous Ivy League graduates and MBAs. Like everyone else, hedge funds perform miserably at times, but their consensus picks have historically outperformed the market after risk adjustments.

Is Aaron’s, Inc. (NYSE:AAN) the right pick for your portfolio? Prominent investors are buying. The number of bullish hedge fund bets improved by 3 recently. Our calculations also showed that aan isn’t among the 30 most popular stocks among hedge funds. AAN was in 21 hedge funds’ portfolios at the end of the fourth quarter of 2018. There were 18 hedge funds in our database with AAN holdings at the end of the previous quarter.

To the average investor there are dozens of metrics investors put to use to assess publicly traded companies. A pair of the most innovative metrics are hedge fund and insider trading sentiment. We have shown that, historically, those who follow the best picks of the best investment managers can beat the market by a healthy margin (see the details here).

We’re going to take a peek at the latest hedge fund action regarding Aaron’s, Inc. (NYSE:AAN).

What does the smart money think about Aaron’s, Inc. (NYSE:AAN)?

At Q4’s end, a total of 21 of the hedge funds tracked by Insider Monkey were bullish on this stock, a change of 17% from one quarter earlier. The graph below displays the number of hedge funds with bullish position in AAN over the last 14 quarters. With hedgies’ sentiment swirling, there exists a few noteworthy hedge fund managers who were adding to their stakes considerably (or already accumulated large positions). 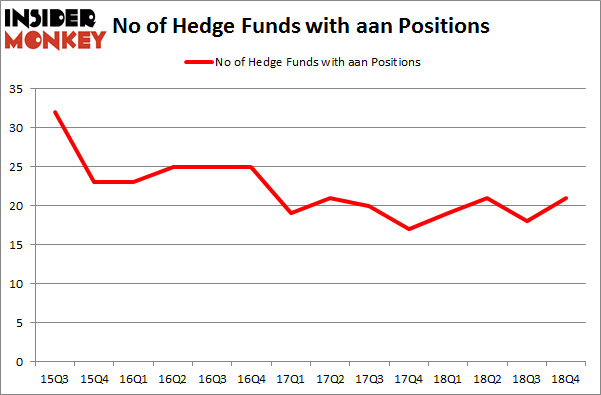 Among these funds, Diamond Hill Capital held the most valuable stake in Aaron’s, Inc. (NYSE:AAN), which was worth $54.5 million at the end of the third quarter. On the second spot was Portolan Capital Management which amassed $25.1 million worth of shares. Moreover, GAMCO Investors, GLG Partners, and D E Shaw were also bullish on Aaron’s, Inc. (NYSE:AAN), allocating a large percentage of their portfolios to this stock.

With a general bullishness amongst the heavyweights, specific money managers have been driving this bullishness. Renaissance Technologies, managed by Jim Simons, assembled the biggest position in Aaron’s, Inc. (NYSE:AAN). Renaissance Technologies had $9.8 million invested in the company at the end of the quarter. Paul Marshall and Ian Wace’s Marshall Wace LLP also made a $2.4 million investment in the stock during the quarter. The other funds with brand new AAN positions are Benjamin A. Smith’s Laurion Capital Management and David Harding’s Winton Capital Management.

As you can see these stocks had an average of 19.25 hedge funds with bullish positions and the average amount invested in these stocks was $313 million. That figure was $187 million in AAN’s case. Array Biopharma Inc (NASDAQ:ARRY) is the most popular stock in this table. On the other hand UMB Financial Corporation (NASDAQ:UMBF) is the least popular one with only 11 bullish hedge fund positions. Aaron’s, Inc. (NYSE:AAN) is not the most popular stock in this group but hedge fund interest is still above average. Our calculations showed that top 15 most popular stocks) among hedge funds returned 24.2% through April 22nd and outperformed the S&P 500 ETF (SPY) by more than 7 percentage points. Hedge funds were also right about betting on AAN, though not to the same extent, as the stock returned 23.6% and outperformed the market as well.