Our extensive research has shown that imitating the smart money can generate significant returns for retail investors, which is why we track nearly 750 active prominent money managers and analyze their quarterly 13F filings. The stocks that are heavily bought by hedge funds historically outperformed the market, though there is no shortage of high profile failures like hedge funds’ recent losses in Facebook. Let’s take a closer look at what the funds we track think about Robert Half International Inc. (NYSE:RHI) in this article.

Is Robert Half International Inc. (NYSE:RHI) the right investment to pursue these days? Investors who are in the know are reducing their bets on the stock though overall hedge fund sentiment towards the stock is still near its all time high. The number of long hedge fund bets retreated by 2 in recent months. Our calculations also showed that RHI isn’t among the 30 most popular stocks among hedge funds. RHI was in 26 hedge funds’ portfolios at the end of December. There were 28 hedge funds in our database with RHI positions at the end of the previous quarter.

At the moment there are numerous formulas shareholders use to size up publicly traded companies. A couple of the best formulas are hedge fund and insider trading interest. We have shown that, historically, those who follow the best picks of the elite fund managers can outperform the S&P 500 by a significant amount (see the details here).

At the end of the fourth quarter, a total of 26 of the hedge funds tracked by Insider Monkey held long positions in this stock, a change of -7% from the previous quarter. On the other hand, there were a total of 21 hedge funds with a bullish position in RHI a year ago. With hedge funds’ capital changing hands, there exists an “upper tier” of notable hedge fund managers who were boosting their stakes considerably (or already accumulated large positions). 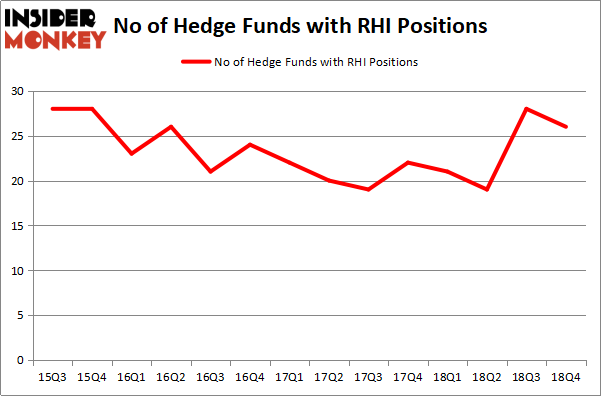 The largest stake in Robert Half International Inc. (NYSE:RHI) was held by AQR Capital Management, which reported holding $343 million worth of stock at the end of September. It was followed by Millennium Management with a $85.4 million position. Other investors bullish on the company included Renaissance Technologies, Gotham Asset Management, and Two Sigma Advisors.

Due to the fact that Robert Half International Inc. (NYSE:RHI) has experienced bearish sentiment from the smart money, logic holds that there exists a select few hedge funds that elected to cut their entire stakes last quarter. At the top of the heap, Principal Global Investors’s Columbus Circle Investors cut the biggest stake of the “upper crust” of funds tracked by Insider Monkey, worth close to $29.8 million in call options, and Israel Englander’s Millennium Management was right behind this move, as the fund sold off about $26.3 million worth. These bearish behaviors are important to note, as aggregate hedge fund interest was cut by 2 funds last quarter.

As you can see these stocks had an average of 17.75 hedge funds with bullish positions and the average amount invested in these stocks was $355 million. That figure was $555 million in RHI’s case. Gaming and Leisure Properties Inc (NASDAQ:GLPI) is the most popular stock in this table. On the other hand Enel Chile S.A. (NYSE:ENIC) is the least popular one with only 7 bullish hedge fund positions. Robert Half International Inc. (NYSE:RHI) is not the most popular stock in this group but hedge fund interest is still above average. Our calculations showed that the top 15 most popular stocks among hedge funds returned 21.3% year-to-date through April 8th and outperformed the S&P 500 ETF (SPY) by more than 5 percentage points. Hedge funds were also right about betting on RHI, though not to the same extent, as the stock returned 17.9% and outperformed the market as well.