Regions Financial Corporation (NYSE:RF) shareholders have witnessed a decrease in activity from the world’s largest hedge funds recently. RF was in 32 hedge funds’ portfolios at the end of the second quarter of 2019. There were 41 hedge funds in our database with RF positions at the end of the previous quarter. Our calculations also showed that RF isn’t among the 30 most popular stocks among hedge funds. 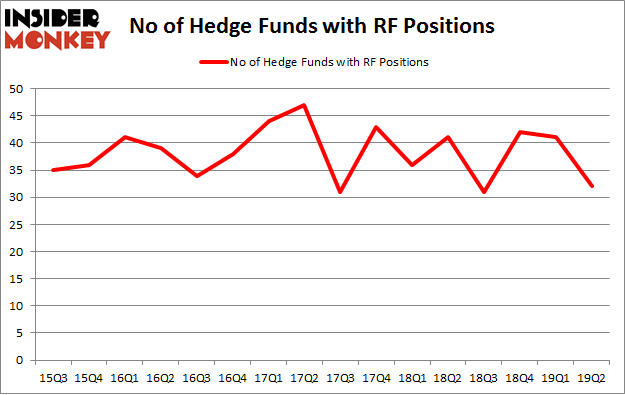 Among these funds, Citadel Investment Group held the most valuable stake in Regions Financial Corporation (NYSE:RF), which was worth $133.9 million at the end of the second quarter. On the second spot was Two Sigma Advisors which amassed $97.7 million worth of shares. Moreover, Arrowstreet Capital, Pzena Investment Management, and Millennium Management were also bullish on Regions Financial Corporation (NYSE:RF), allocating a large percentage of their portfolios to this stock.

Since Regions Financial Corporation (NYSE:RF) has witnessed bearish sentiment from the smart money, logic holds that there exists a select few hedgies who sold off their positions entirely by the end of the second quarter. It’s worth mentioning that Clint Carlson’s Carlson Capital dumped the largest investment of all the hedgies monitored by Insider Monkey, totaling an estimated $31.6 million in stock, and Phill Gross and Robert Atchinson’s Adage Capital Management was right behind this move, as the fund cut about $21.7 million worth. These transactions are intriguing to say the least, as aggregate hedge fund interest fell by 9 funds by the end of the second quarter.

As you can see these stocks had an average of 30.5 hedge funds with bullish positions and the average amount invested in these stocks was $1468 million. That figure was $700 million in RF’s case. BioMarin Pharmaceutical Inc. (NASDAQ:BMRN) is the most popular stock in this table. On the other hand Gartner Inc (NYSE:IT) is the least popular one with only 17 bullish hedge fund positions. Regions Financial Corporation (NYSE:RF) is not the most popular stock in this group but hedge fund interest is still above average. Our calculations showed that top 20 most popular stocks (see the video below) among hedge funds returned 24.4% in 2019 through September 30th and outperformed the S&P 500 ETF (SPY) by 4 percentage points. Hedge funds were also right about betting on RF as the stock returned 7% during the third quarter and outperformed the market. Hedge funds were rewarded for their relative bullishness.