The 700+ hedge funds and famous money managers tracked by Insider Monkey have already compiled and submitted their 13F filings for the third quarter, which unveil their equity positions as of September 30. We went through these filings, fixed typos and other more significant errors and identified the changes in hedge fund portfolios. Our extensive review of these public filings is finally over, so this article is set to reveal the smart money sentiment towards Celgene Corporation (NASDAQ:CELG) and its peers such as Automatic Data Processing, Inc. (NASDAQ:ADP), Duke Energy Corporation (NYSE:DUK), The Bank of Nova Scotia (NYSE:BNS), and BlackRock, Inc. (NYSE:BLK).

Celgene Corporation (NASDAQ:CELG) has experienced an increase in enthusiasm from smart money lately. CELG was in 93 hedge funds’ portfolios at the end of the third quarter of 2019. There were 88 hedge funds in our database with CELG positions at the end of the previous quarter. Our calculations also showed that CELG ranked 17th overall among the 30 most popular stocks among hedge funds (see the video below).

Heading into the fourth quarter of 2019, a total of 93 of the hedge funds tracked by Insider Monkey held long positions in this stock, a change of 6% from the previous quarter. On the other hand, there were a total of 56 hedge funds with a bullish position in CELG a year ago. With the smart money’s positions undergoing their usual ebb and flow, there exists a select group of key hedge fund managers who were adding to their holdings significantly (or already accumulated large positions). 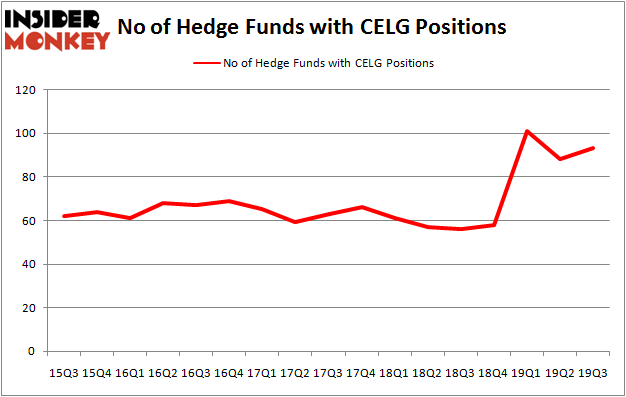 More specifically, Renaissance Technologies was the largest shareholder of Celgene Corporation (NASDAQ:CELG), with a stake worth $1543.8 million reported as of the end of September. Trailing Renaissance Technologies was Adage Capital Management, which amassed a stake valued at $1476.1 million. Orbis Investment Management, Citadel Investment Group, and Abrams Capital Management were also very fond of the stock, becoming one of the largest hedge fund holders of the company. In terms of the portfolio weights assigned to each position Sand Grove Capital Partners allocated the biggest weight to Celgene Corporation (NASDAQ:CELG), around 48.1% of its portfolio. Birchview Capital is also relatively very bullish on the stock, dishing out 46.29 percent of its 13F equity portfolio to CELG.

Let’s now take a look at hedge fund activity in other stocks – not necessarily in the same industry as Celgene Corporation (NASDAQ:CELG) but similarly valued. These stocks are Automatic Data Processing, Inc. (NASDAQ:ADP), Duke Energy Corporation (NYSE:DUK), The Bank of Nova Scotia (NYSE:BNS), and BlackRock, Inc. (NYSE:BLK). This group of stocks’ market values are closest to CELG’s market value.

As you can see these stocks had an average of 33.5 hedge funds with bullish positions and the average amount invested in these stocks was $1534 million. That figure was $12535 million in CELG’s case. Automatic Data Processing, Inc. (NASDAQ:ADP) is the most popular stock in this table. On the other hand The Bank of Nova Scotia (NYSE:BNS) is the least popular one with only 15 bullish hedge fund positions. Compared to these stocks Celgene Corporation (NASDAQ:CELG) is more popular among hedge funds. Our calculations showed that top 20 most popular stocks among hedge funds returned 34.7% in 2019 through November 22nd and outperformed the S&P 500 ETF (SPY) by 8.5 percentage points. Hedge funds were also right about betting on CELG as the stock returned 9% during Q4 (through 11/22) and outperformed the market by an even larger margin. Hedge funds were clearly right about piling into this stock relative to other stocks with similar market capitalizations.