Is Allergan plc (NYSE:AGN) a buy, sell, or hold? Hedge funds are buying. The number of long hedge fund positions improved by 27 recently. Our calculations also showed that AGN is now ranked 22nd among the 30 most popular stocks among hedge funds.

Unlike some fund managers who are betting on Dow reaching 40000 in a year, our long-short investment strategy doesn’t rely on bull markets to deliver double digit returns. We only rely on hedge fund buy/sell signals. We’re going to review the fresh hedge fund action regarding Allergan plc (NYSE:AGN).

What have hedge funds been doing with Allergan plc (NYSE:AGN)? 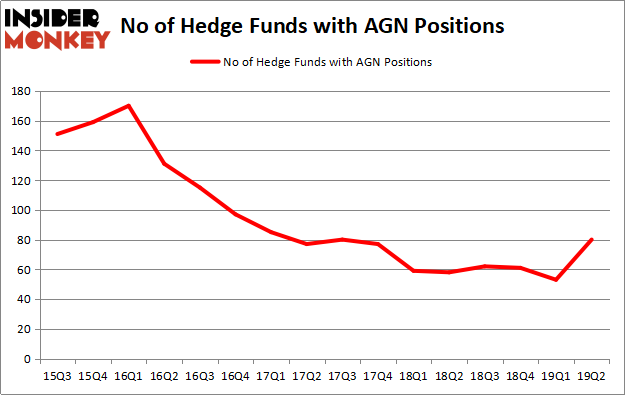 According to publicly available hedge fund and institutional investor holdings data compiled by Insider Monkey, Baupost Group, managed by Seth Klarman, holds the number one position in Allergan plc (NYSE:AGN). Baupost Group has a $616.1 million position in the stock, comprising 5.6% of its 13F portfolio. Coming in second is Pentwater Capital Management, led by Matthew Halbower, holding a $598.7 million position; 6.4% of its 13F portfolio is allocated to the stock. Some other members of the smart money that hold long positions include Jim Simons’s Renaissance Technologies, John Paulson’s Paulson & Co and Israel Englander’s Millennium Management.

As aggregate interest increased, key hedge funds have been driving this bullishness. Empyrean Capital Partners, managed by Michael A. Price and Amos Meron, assembled the most valuable position in Allergan plc (NYSE:AGN). Empyrean Capital Partners had $172 million invested in the company at the end of the quarter. OZ Management also made a $150.9 million investment in the stock during the quarter. The following funds were also among the new AGN investors: Robert Emil Zoellner’s Alpine Associates, Stephen DuBois’s Camber Capital Management, and Carl Tiedemann and Michael Tiedemann’s TIG Advisors.

As you can see these stocks had an average of 34.25 hedge funds with bullish positions and the average amount invested in these stocks was $1465 million. That figure was $6168 million in AGN’s case. Zoetis Inc (NYSE:ZTS) is the most popular stock in this table. On the other hand Takeda Pharmaceutical Company Limited (NYSE:TAK) is the least popular one with only 27 bullish hedge fund positions. Compared to these stocks Allergan plc (NYSE:AGN) is more popular among hedge funds. Our calculations showed that top 20 most popular stocks among hedge funds returned 24.4% in 2019 through September 30th and outperformed the S&P 500 ETF (SPY) by 4 percentage points. Unfortunately AGN wasn’t nearly as successful as these 20 stocks as the stock returned 1% during the third quarter and underperformed the market. These types of returns are normal for merger arbitrage stocks though. If you are interested in investing in large cap stocks with huge upside potential, you should check out the top 20 most popular stocks among hedge funds as many of these stocks already outperformed the market in Q3.