With the first-quarter round of 13F filings behind us it is time to take a look at the stocks in which some of the best money managers in the world preferred to invest or sell heading into the second quarter. One of these stocks was Citigroup Inc. (NYSE:C).

Citigroup Inc. (NYSE:C) was in 83 hedge funds’ portfolios at the end of June. C has experienced a decrease in activity from the world’s largest hedge funds of late. There were 87 hedge funds in our database with C holdings at the end of the previous quarter. Despite the decline our calculations showed that C still ranks 20th among the 30 most popular stocks among hedge funds.

In the 21st century investor’s toolkit there are a multitude of indicators investors can use to analyze publicly traded companies. A pair of the most innovative indicators are hedge fund and insider trading interest. Our experts have shown that, historically, those who follow the top picks of the elite hedge fund managers can trounce the S&P 500 by a healthy amount (see the details here). Unlike some fund managers who are betting on Dow reaching 40000 in a year, our long-short investment strategy outperformed the broader market indices in down markets as well.

Unlike some fund managers who are betting on Dow reaching 40000 in a year, our long-short investment strategy doesn’t rely on bull markets to deliver double digit returns. We only rely on hedge fund buy/sell signals. Let’s review the fresh hedge fund action regarding Citigroup Inc. (NYSE:C).

At Q2’s end, a total of 83 of the hedge funds tracked by Insider Monkey held long positions in this stock, a change of -5% from one quarter earlier. The graph below displays the number of hedge funds with bullish position in C over the last 16 quarters. With hedgies’ sentiment swirling, there exists a select group of notable hedge fund managers who were upping their stakes considerably (or already accumulated large positions). 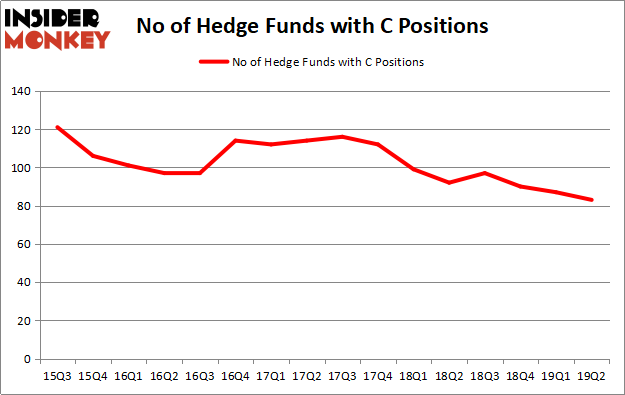 The largest stake in Citigroup Inc. (NYSE:C) was held by ValueAct Capital, which reported holding $2207.7 million worth of stock at the end of March. It was followed by Eagle Capital Management with a $1877.2 million position. Other investors bullish on the company included Greenhaven Associates, Diamond Hill Capital, and Pzena Investment Management.

Because Citigroup Inc. (NYSE:C) has experienced a decline in interest from the smart money, it’s easy to see that there was a specific group of hedge funds that decided to sell off their full holdings last quarter. At the top of the heap, Alex Snow’s Lansdowne Partners cut the biggest investment of the “upper crust” of funds tracked by Insider Monkey, valued at an estimated $241.1 million in call options, and Robert Pitts’s Steadfast Capital Management was right behind this move, as the fund sold off about $62.2 million worth. These bearish behaviors are important to note, as aggregate hedge fund interest dropped by 4 funds last quarter.

As you can see these stocks had an average of 33.5 hedge funds with bullish positions and the average amount invested in these stocks was $1685 million. That figure was $10544 million in C’s case. McDonald’s Corporation (NYSE:MCD) is the most popular stock in this table. On the other hand The Unilever Group (NYSE:UN) is the least popular one with only 16 bullish hedge fund positions. Compared to these stocks Citigroup Inc. (NYSE:C) is more popular among hedge funds. Our calculations showed that top 20 most popular stocks among hedge funds returned 24.4% in 2019 through September 30th and outperformed the S&P 500 ETF (SPY) by 4 percentage points. Unfortunately C wasn’t nearly as successful as these 20 stocks and hedge funds that were betting on C were disappointed as the stock returned -0.6% during the third quarter and underperformed the market. If you are interested in investing in large cap stocks with huge upside potential, you should check out the top 20 most popular stocks among hedge funds as many of these stocks already outperformed the market in Q3.