Hedge Funds Were Overwhelmingly Bullish On This Stock

We at Insider Monkey have gone over 700 13F filings that hedge funds and prominent investors are required to file by the government. The 13F filings show the funds’ and investors’ portfolio positions as of June 30. In this article we look at what those investors think of NXP Semiconductors NV (NASDAQ:NXPI) and compare it against similarly valued stocks like China Telecom Corporation Limited (ADR) (NYSE:CHA), National Grid plc (ADR) (NYSE:NGG), Regeneron Pharmaceuticals Inc (NASDAQ:REGN), and Fiat Chrysler Automobiles NV (NYSE:FCAU).

In the financial world there are a lot of formulas shareholders can use to analyze publicly traded companies. A duo of the best formulas are hedge fund and insider trading signals. Our experts have shown that, historically, those who follow the top picks of the elite money managers can trounce their index-focused peers by a superb margin. Insider Monkey’s flagship best performing hedge funds strategy returned 17.4% year to date and outperformed the market by more than 14 percentage points this year. This strategy also outperformed the market by 3 percentage points in the fourth quarter despite the market volatility (see the details here). That’s why we believe hedge fund sentiment is a useful indicator that investors should pay attention to. 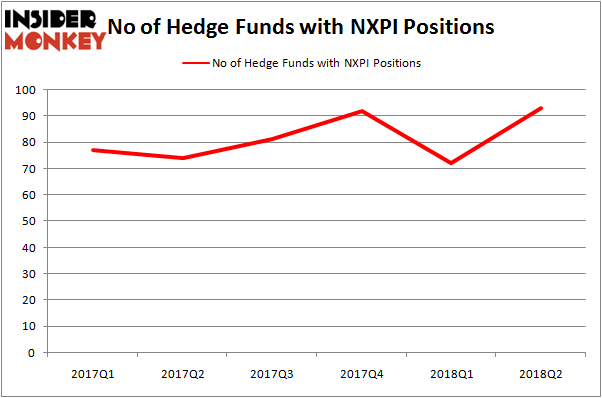 Among these funds, Elliott Management held the most valuable stake in NXP Semiconductors NV (NASDAQ:NXPI), which was worth $1.9 billions at the end of the second quarter. Paul Singer’s hedge fund revealed reducing its NXPI position  by about 40% by the end of July after Qualcomm called of the $44 billion deal to buy NXPI. On the second spot was HBK Investments which amassed $1.7 billions worth of shares. Moreover, Twin Capital Management, Litespeed Management, and Sand Grove Capital Partners were also bullish on NXP Semiconductors NV (NASDAQ:NXPI), allocating a large percentage of their portfolios to this stock.

As you can see these stocks had an average of 18.75 hedge funds with bullish positions and the average amount invested in these stocks was $751 million. That figure was $15.7 billion in NXPI’s case. Fiat Chrysler Automobiles NV (NYSE:FCAU) is the most popular stock in this table. On the other hand China Telecom Corporation Limited (ADR) (NYSE:CHA) is the least popular one with only 5 bullish hedge fund positions. Compared to these stocks NXP Semiconductors NV (NASDAQ:NXPI) is more popular among hedge funds.

There is a 45-day delay in 13F filings. Usually this delay doesn’t affect our stock picks noticeably. NXPI was an exception because hedge funds overwhelmingly bet on the stock even though it was becoming clear that Chinese regulators wasn’t going to approve the merger. I think hedge funds got burned because of the rumors in early June that China was ready to approve the deal and analysts were publishing bullish reports giving the impression that NXPI would perform well even if the deal doesn’t go through. Well, they were wrong. NXPI shares are currently trading at $82 and actually present a much better investment opportunity after receiving $2 billion in break-up fee from Qualcomm. We believe merger arbitrage focused hedge funds are done selling and NXPI will outperform the market in the next 12 months.

Best Performing Hedge Funds Strategy
Download a free copy of our newsletter and see the details inside!
Hedge Fund Resource Center
Related News
25 Most Popular Stocks Among Hedge Funds in 2018 Here’s Why These Five Stocks Are Trending Graham Capital Management’s Return, AUM, and Holdings Top 3 M&A Plays of 2018 According To WallachBeth Capital Hedge Funds Like These European Companies; Should You? Hedge Funds Are Piling Into These Semiconductor Stocks These Are Billionaire Paul Singer’s Stock Picks That You NEED to Avoid 5 Ways You Can Eliminate Credit Card Debt 10 Easiest Road Test Sites in NY and NJ 10 Hottest Selling Products in the USA in 2018
Billionaire Hedge Funds