The market has been volatile in the last few months as the Federal Reserve finalized its rate cuts and uncertainty looms over trade negotiations with China. Small cap stocks have been hit hard as a result, as the Russell 2000 ETF (IWM) has underperformed the larger S&P 500 ETF (SPY) by more than 10 percentage points over the last 12 months. SEC filings and hedge fund investor letters indicate that the smart money seems to be paring back their overall long exposure since summer months, though some funds increased their exposure dramatically at the end of Q3 and the beginning of Q4. In this article, we analyze what the smart money thinks of Interactive Brokers Group, Inc. (NASDAQ:IBKR) and find out how it is affected by hedge funds’ moves. IBKR is a discount brokerage company that made our list of the best brokers for penny stocks a couple of years ago. IBKR shares suffered losses in recent months as another discount brokerage firm started offering free trades which forced everyone else to follow suit. IBKR is a $20 billion company but it was top 15 holding in two ETFs: iShares U.S. Broker-Dealers & Securities Exchanges ETF (NYSE:IAI) and Invesco Zacks Mid-Cap ETF (NYSE:CZA).

Interactive Brokers Group, Inc. (NASDAQ:IBKR) shares haven’t seen a lot of action during the third quarter. Overall, hedge fund sentiment was unchanged. The stock was in 24 hedge funds’ portfolios at the end of the third quarter of 2019. The level and the change in hedge fund popularity aren’t the only variables you need to analyze to decipher hedge funds’ perspectives. A stock may witness a boost in popularity but it may still be less popular than similarly priced stocks. That’s why at the end of this article we will examine companies such as Microchip Technology Incorporated (NASDAQ:MCHP), State Street Corporation (NYSE:STT), and Cheniere Energy Partners LP (NYSEAMEX:CQP) to gather more data points. Our calculations also showed that IBKR isn’t among the 30 most popular stocks among hedge funds (click for Q3 rankings and see the video below for Q2 rankings).

Unlike the largest US hedge funds that are convinced Dow will soar past 40,000 or the world’s most bearish hedge fund that’s more convinced than ever that a crash is coming, our long-short investment strategy doesn’t rely on bull or bear markets to deliver double digit returns. We only rely on the best performing hedge funds‘ buy/sell signals. We’re going to take a look at the new hedge fund action regarding Interactive Brokers Group, Inc. (NASDAQ:IBKR).

At Q3’s end, a total of 24 of the hedge funds tracked by Insider Monkey were bullish on this stock, a change of 0% from one quarter earlier. On the other hand, there were a total of 29 hedge funds with a bullish position in IBKR a year ago. With the smart money’s sentiment swirling, there exists a few notable hedge fund managers who were boosting their holdings substantially (or already accumulated large positions). 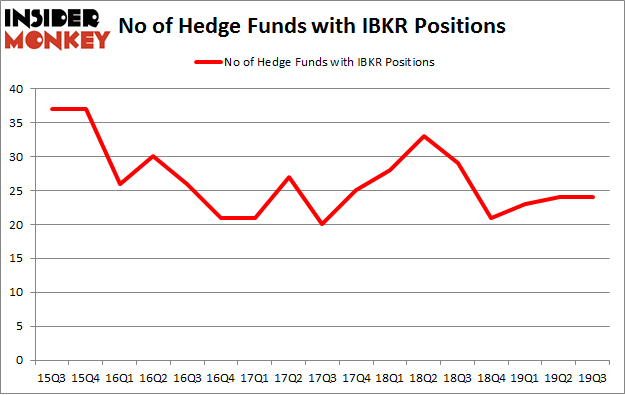 Among these funds, Bares Capital Management held the most valuable stake in Interactive Brokers Group, Inc. (NASDAQ:IBKR), which was worth $400 million at the end of the third quarter. On the second spot was Cantillon Capital Management which amassed $137.4 million worth of shares. Select Equity Group, Teton Capital, and Arlington Value Capital were also very fond of the stock, becoming one of the largest hedge fund holders of the company. In terms of the portfolio weights assigned to each position Teton Capital allocated the biggest weight to Interactive Brokers Group, Inc. (NASDAQ:IBKR), around 14.44% of its portfolio. Bares Capital Management is also relatively very bullish on the stock, setting aside 12.01 percent of its 13F equity portfolio to IBKR.

Due to the fact that Interactive Brokers Group, Inc. (NASDAQ:IBKR) has faced declining sentiment from the entirety of the hedge funds we track, we can see that there was a specific group of funds that slashed their entire stakes last quarter. At the top of the heap, James Woodson Davis’s Woodson Capital Management dumped the largest investment of the 750 funds followed by Insider Monkey, comprising about $13.6 million in stock. George Baxter’s fund, Sabrepoint Capital, also dumped its stock, about $6.2 million worth. These moves are intriguing to say the least, as aggregate hedge fund interest stayed the same (this is a bearish signal in our experience).

As you can see these stocks had an average of 28.25 hedge funds with bullish positions and the average amount invested in these stocks was $1242 million. That figure was $1031 million in IBKR’s case. Alexion Pharmaceuticals, Inc. (NASDAQ:ALXN) is the most popular stock in this table. On the other hand Cheniere Energy Partners LP (NYSE:CQP) is the least popular one with only 5 bullish hedge fund positions. Interactive Brokers Group, Inc. (NASDAQ:IBKR) is not the least popular stock in this group but hedge fund interest is still below average. This is a slightly negative signal and we’d rather spend our time researching stocks that hedge funds are piling on. Our calculations showed that top 20 most popular stocks among hedge funds returned 37.4% in 2019 through the end of November and outperformed the S&P 500 ETF (SPY) by 9.9 percentage points. Unfortunately IBKR wasn’t nearly as popular as these 20 stocks (hedge fund sentiment was quite bearish); IBKR investors were disappointed as the stock returned -9.8% during the first two months of the fourth quarter and underperformed the market. If you are interested in investing in large cap stocks with huge upside potential, you should check out the top 20 most popular stocks among hedge funds as 70 percent of these stocks already outperformed the market in Q4.