After several tireless days we have finished crunching the numbers from the more than 700 13F filings issued by the elite hedge funds and other investment firms that we track at Insider Monkey, which disclosed those firms’ equity portfolios as of September 30. The results of that effort will be put on display in this article, as we share valuable insight into the smart money sentiment towards Interactive Brokers Group, Inc. (NASDAQ:IBKR).

Interactive Brokers Group, Inc. (NASDAQ:IBKR) has seen a decrease in enthusiasm from smart money lately. At the end of the third quarter, there were 29 smart money investors long the stock, down from 33 in the previous quarter. This number of bullish investor wasn’t enough for the stock to be considered as one of the 30 most popular stocks among hedge funds.

While gathering more data on Interactive Brokers Group, Inc. (NASDAQ:IBKR), we tracked down this EVCM fund’s  3rd quarter letter, in which the fund shares its views on the company, and discusses its recent stock price decline. We bring you a few paragraphs from that report.

“Interactive Brokers offers the world’s lowest cost and most technologically advanced securities brokerage services. It is consistently ranked as the best broker by various investing publications. By relentlessly focusing on automation of back office tasks and expanding into ever more markets, the company has created a significant cost and coverage advantage over competing brokerages. Over the next decade, IBKR can disrupt the traditional brokerage industry and capture a large market share. We think CEO Thomas Peterffy is an exceptionally good manager and his incentives are aligned with long term shareholders.”

“IBKR’s stock declined in the last few months from $80 to $49. We are unable to find a justifiable reason for such a large decline so we have purchased more shares. Currently trading for 18 times 2019 earnings with the potential to continue disrupting the brokerage industry and grow 15% – 20% annually for the foreseeable future, we think IBKR is a bargain.”

In spite of this EVCM fund’s optimism for the stock, with the fund claiming that the stock is a bargain, other hedge funds don’t seem to share EVCM fund’s views, considering the recent decrease in the number of investors long the stock. We are also not convinced, which is why we are going to examine it furthermore.

How have hedgies been trading Interactive Brokers Group, Inc. (NASDAQ:IBKR)?

At Q3’s end, a total of 29 of the hedge funds tracked by Insider Monkey were long this stock, a change of -12% from the previous quarter. By comparison, 25 hedge funds held shares or bullish call options in IBKR heading into this year. With hedge funds’ sentiment swirling, there exists a select group of noteworthy hedge fund managers who were upping their stakes considerably (or already accumulated large positions). 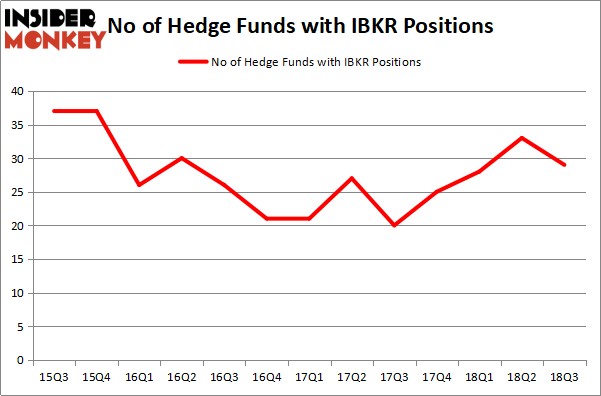 Due to the fact that Interactive Brokers Group, Inc. (NASDAQ:IBKR) has witnessed declining sentiment from the aggregate hedge fund industry, logic holds that there lies a certain “tier” of hedge funds that elected to cut their full holdings in the third quarter. Interestingly, Jim Simons’ Renaissance Technologies cut the biggest position of the “upper crust” of funds watched by Insider Monkey, worth an estimated $20.6 million in stock, and James Crichton’s Hitchwood Capital Management was right behind this move, as the fund sold off about $19.3 million worth. These moves are interesting, as total hedge fund interest dropped by 4 funds in the third quarter.

As you can see these stocks had an average of 37 hedge funds with bullish positions and the average amount invested in these stocks was $1.93 billion. That figure was $990 million in IBKR’s case. First Data Corp (NYSE:FDC) is the most popular stock in this table. On the other hand CenturyLink, Inc. (NYSE:CTL) is the least popular one with only 24 bullish hedge fund positions. Interactive Brokers Group, Inc. (NASDAQ:IBKR) is not the least popular stock in this group but hedge fund interest is still below average. This is a slightly negative signal and we’d rather spend our time researching stocks that hedge funds are piling on. In this regard FDC might be a better candidate to consider a long position.