Last year’s fourth quarter was a rough one for investors and many hedge funds, which were naturally unable to overcome the big dip in the broad market, as the S&P 500 fell by about 4.8% during 2018 and average hedge fund losing about 1%. The Russell 2000, composed of smaller companies, performed even worse, trailing the S&P by more than 6 percentage points, as investors fled less-known quantities for safe havens. Luckily hedge funds were shifting their holdings into large-cap stocks. The 20 most popular hedge fund stocks actually generated an average return of 37.4% in 2019 (through the end of November) and outperformed the S&P 500 ETF by 9.9 percentage points. We are done processing the latest 13F filings and in this article we will study how hedge fund sentiment towards Tractor Supply Company (NASDAQ:TSCO) changed during the first quarter.

Tractor Supply Company (NASDAQ:TSCO) was in 36 hedge funds’ portfolios at the end of September. TSCO has experienced an increase in activity from the world’s largest hedge funds of late. There were 35 hedge funds in our database with TSCO positions at the end of the previous quarter. Our calculations also showed that TSCO isn’t among the 30 most popular stocks among hedge funds (click for Q3 rankings and see the video below for Q2 rankings).

At the moment there are several indicators shareholders employ to appraise stocks. A duo of the most under-the-radar indicators are hedge fund and insider trading sentiment. Our researchers have shown that, historically, those who follow the best picks of the elite money managers can outpace the market by a healthy amount (see the details here).

Unlike the largest US hedge funds that are convinced Dow will soar past 40,000 or the world’s most bearish hedge fund that’s more convinced than ever that a crash is coming, our long-short investment strategy doesn’t rely on bull or bear markets to deliver double digit returns. We only rely on the best performing hedge funds‘ buy/sell signals. We’re going to take a peek at the new hedge fund action surrounding Tractor Supply Company (NASDAQ:TSCO).

Heading into the fourth quarter of 2019, a total of 36 of the hedge funds tracked by Insider Monkey were bullish on this stock, a change of 3% from the second quarter of 2019. The graph below displays the number of hedge funds with bullish position in TSCO over the last 17 quarters. With hedge funds’ sentiment swirling, there exists a few notable hedge fund managers who were adding to their stakes considerably (or already accumulated large positions). 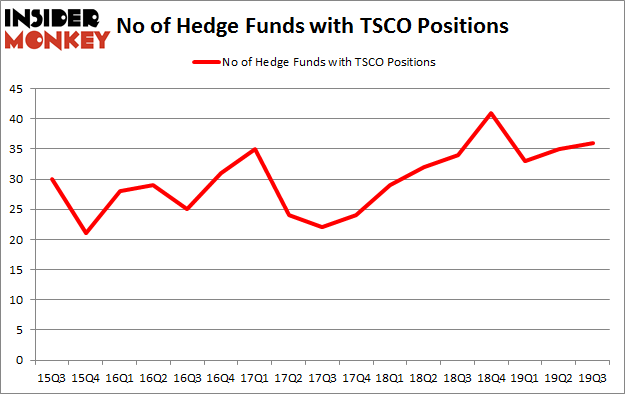 More specifically, AQR Capital Management was the largest shareholder of Tractor Supply Company (NASDAQ:TSCO), with a stake worth $110.6 million reported as of the end of September. Trailing AQR Capital Management was Arrowstreet Capital, which amassed a stake valued at $77.9 million. Samlyn Capital, Renaissance Technologies, and Two Sigma Advisors were also very fond of the stock, becoming one of the largest hedge fund holders of the company. In terms of the portfolio weights assigned to each position Harvest Capital Strategies allocated the biggest weight to Tractor Supply Company (NASDAQ:TSCO), around 5.16% of its portfolio. Park Presidio Capital is also relatively very bullish on the stock, earmarking 4.31 percent of its 13F equity portfolio to TSCO.

Now, key hedge funds were leading the bulls’ herd. Park Presidio Capital, managed by Lee Hicks and Jan Koerner, initiated the most valuable position in Tractor Supply Company (NASDAQ:TSCO). Park Presidio Capital had $36.6 million invested in the company at the end of the quarter. Steven Boyd’s Armistice Capital also made a $9.8 million investment in the stock during the quarter. The other funds with new positions in the stock are Matthew Tewksbury’s Stevens Capital Management, Matthew Hulsizer’s PEAK6 Capital Management, and Benjamin A. Smith’s Laurion Capital Management.

As you can see these stocks had an average of 31.25 hedge funds with bullish positions and the average amount invested in these stocks was $745 million. That figure was $640 million in TSCO’s case. SVB Financial Group (NASDAQ:SIVB) is the most popular stock in this table. On the other hand Camden Property Trust (NYSE:CPT) is the least popular one with only 20 bullish hedge fund positions. Tractor Supply Company (NASDAQ:TSCO) is not the most popular stock in this group but hedge fund interest is still above average. This is a slightly positive signal but we’d rather spend our time researching stocks that hedge funds are piling on. Our calculations showed that top 20 most popular stocks among hedge funds returned 37.4% in 2019 through the end of November and outperformed the S&P 500 ETF (SPY) by 9.9 percentage points. Unfortunately TSCO wasn’t nearly as popular as these 20 stocks and hedge funds that were betting on TSCO were disappointed as the stock returned 4.8% during the fourth quarter (through the end of November) and underperformed the market. If you are interested in investing in large cap stocks with huge upside potential, you should check out the top 20 most popular stocks among hedge funds as many of these stocks already outperformed the market so far this year.