The market has been volatile in the last few months as the Federal Reserve continued its rate cuts and uncertainty looms over trade negotiations with China. Small cap stocks have been hit hard as a result, as the Russell 2000 ETF (IWM) has underperformed the larger S&P 500 ETF (SPY) by more than 10 percentage points over the last 12 months. SEC filings and hedge fund investor letters indicate that the smart money seems to be paring back their overall long exposure since summer months, though some funds increased their exposure dramatically at the end of Q2 and the beginning of Q3. In this article, we analyze what the smart money thinks of The Coca-Cola Company (NYSE:KO) and find out how it is affected by hedge funds’ moves.

The Coca-Cola Company (NYSE:KO) shares haven’t seen a lot of action during the second quarter. Overall, hedge fund sentiment was unchanged. The stock was in 48 hedge funds’ portfolios at the end of June. At the end of this article we will also compare KO to other stocks including Merck & Co., Inc. (NYSE:MRK), Intel Corporation (NASDAQ:INTC), and Wells Fargo & Company (NYSE:WFC) to get a better sense of its popularity.

Unlike some fund managers who are betting on Dow reaching 40000 in a year, our long-short investment strategy doesn’t rely on bull markets to deliver double digit returns. We only rely on hedge fund buy/sell signals. We’re going to go over the recent hedge fund action surrounding The Coca-Cola Company (NYSE:KO).

Heading into the third quarter of 2019, a total of 48 of the hedge funds tracked by Insider Monkey were bullish on this stock, a change of 0% from one quarter earlier. On the other hand, there were a total of 39 hedge funds with a bullish position in KO a year ago. With the smart money’s positions undergoing their usual ebb and flow, there exists a few key hedge fund managers who were upping their holdings meaningfully (or already accumulated large positions). 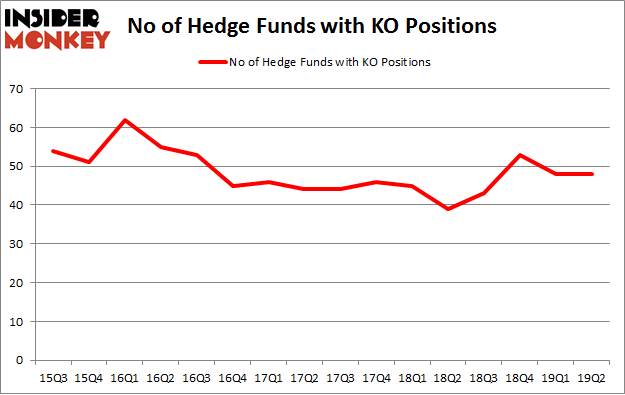 More specifically, Berkshire Hathaway was the largest shareholder of The Coca-Cola Company (NYSE:KO), with a stake worth $20368 million reported as of the end of March. Trailing Berkshire Hathaway was Yacktman Asset Management, which amassed a stake valued at $666.5 million. Citadel Investment Group, Adage Capital Management, and Two Sigma Advisors were also very fond of the stock, giving the stock large weights in their portfolios.

Since The Coca-Cola Company (NYSE:KO) has experienced declining sentiment from the entirety of the hedge funds we track, it’s easy to see that there is a sect of hedgies that slashed their entire stakes heading into Q3. Interestingly, Benjamin A. Smith’s Laurion Capital Management dropped the biggest position of the “upper crust” of funds monitored by Insider Monkey, valued at an estimated $7.9 million in stock. David Costen Haley’s fund, HBK Investments, also dumped its stock, about $5.3 million worth. These transactions are interesting, as aggregate hedge fund interest stayed the same (this is a bearish signal in our experience).

As you can see these stocks had an average of 55 hedge funds with bullish positions and the average amount invested in these stocks was $9635 million. That figure was $22584 million in KO’s case. Merck & Co., Inc. (NYSE:MRK) is the most popular stock in this table. On the other hand Taiwan Semiconductor Manufacturing Company Limited (NYSE:TSM) is the least popular one with only 42 bullish hedge fund positions. The Coca-Cola Company (NYSE:KO) is not the least popular stock in this group but hedge fund interest is still below average. Our calculations showed that top 20 most popular stocks among hedge funds returned 24.4% in 2019 through September 30th and outperformed the S&P 500 ETF (SPY) by 4 percentage points. Hedge funds were also right about betting on KO as the stock returned 7.7% during the same time frame and outperformed the market by an even larger margin.