Cook & Bynam has just released its 2018 Annual Investor Letter, in which it has presented its performance record, reporting 7.1% gain since its inception in 2001, versus 6.4% for the S&P 500. You can track down a copy of its letter – here. In the letter, Cook & Bynum also shared its concentrated portfolio updates and its views on the companies in it. Among those companies is The Coca-Cola Company (NYSE:KO), for which Cook & Bynam have further positive expectations. We bring you that part of the letter here:

“James Quincey is shifting Coca-Cola to a “total beverages” company with increased innovation and openness, and the company now has 21 brands with over $1 billion in annual sales across sparkling, still, energy, juice, and water categories. On a regular basis, we speak to bottlers throughout the global Coke system as well as competitors and retailers. The consistent feedback is that Quincey is encouraging greater flexibility, whether that is producing an alcoholic beverage in Japan or distributing Diageo products in Chile. Coke has an enhanced awareness of the power of its global distribution system and is seeking new ways to monetize that reach. Monster Energy drinks are the most recent example of this distribution power. In 2014, Coke took an equity position in Monster and began distributing its products globally, which has been a big success for both companies. During 2018, Coke acquired Body Armor and Costa Coffee with the belief that it can achieve a similar level of success as it did with Monster. Coke has also responded to the global pressure to tax drinks containing sugar by reformulating many products to contain less or no sugar. For example, in a number of markets, Sprite contains no sugar and just has a normal green label without the Zero designation. Coke’s relaunch of Diet Coke in the United States has returned it to volume growth after several years of sharp declines. Fundamentally, Coke is working to meet consumers’ evolving needs and preferences.

Coke has shrunk its bureaucracy, has made a conscious effort to decentralize decision-making to on-the-ground experts closer to the individual markets. For example, Coke’s decisions about Argentinean and Chilean markets were formerly made in Atlanta. Now, they are made primarily by a better-informed regional team based in Buenos Aires.

Coke has largely finished its multiyear refranchising effort that transferred underperforming territories to the strongest bottlers in its system, such as Birmingham-based Coca-Cola United and Arca. We expect these best-in-class bottlers’ expertise to help increase North American volumes and revenues in the coming years. Through the first nine months of 2018, volumes increased 2% and organic revenues climbed 6%. Of course, Coke’s long-term success will ultimately be determined by how well the company executes in non-U.S. markets. Around 80% of Coke’s profitability is outside of the U.S., where the company has consistently grown profits in aggregate. Thanks to an emerging middle class and good execution, we continue to expect that Coke will achieve annual earnings growth in the mid- to high-single digits. Given this consistent growth and a current free cash flow yield of around 5%, we expect sufficient returns from current prices.”

The Coca-Cola Company manufactures a plethora of nonalcoholic beverages, and it is mostly known for its flagship soft drink – Coca-Cola, which was created back in 1886. The company is trading at a price-to-earnings ratio of 31.16, and its current market cap is of $199.82 billion. Over the past 12 months, Coca-Cola’s stock gained 6.86%, and on April 12th it had a closing price of $46.74.

Among these funds, Berkshire Hathaway held the most valuable stake in The Coca-Cola Company (NYSE:KO), which was worth $18940 million at the end of the third quarter. On the second spot was Yacktman Asset Management which amassed $626.8 million worth of shares. Moreover, Adage Capital Management, Two Sigma Advisors, and Alkeon Capital Management were also bullish on The Coca-Cola Company (NYSE:KO), allocating a large percentage of their portfolios to this stock. 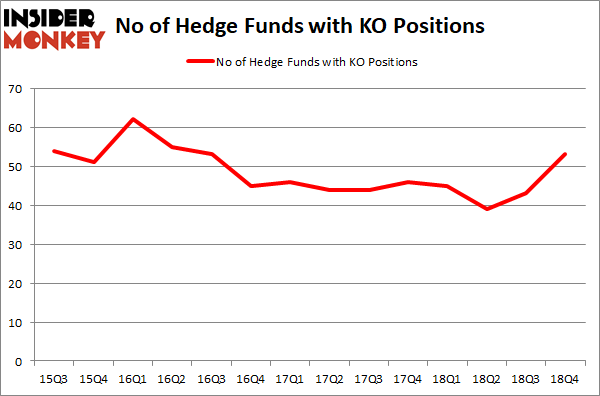