A whopping number of 13F filings filed with U.S. Securities and Exchange Commission has been processed by Insider Monkey so that individual investors can look at the overall hedge fund sentiment towards the stocks included in their watchlists. These freshly-submitted public filings disclose money managers’ equity positions as of the end of the three-month period that ended June 28, so let’s proceed with the discussion of the hedge fund sentiment on Target Corporation (NYSE:TGT).

Is Target Corporation (NYSE:TGT) a first-rate stock to buy now? Investors who are in the know are getting less bullish. The number of bullish hedge fund bets were cut by 13 in recent months. Our calculations also showed that TGT isn’t among the 30 most popular stocks among hedge funds (watch the video below). TGT was in 37 hedge funds’ portfolios at the end of the second quarter of 2019. There were 50 hedge funds in our database with TGT holdings at the end of the previous quarter.

To the average investor there are tons of signals investors can use to assess their stock investments. A duo of the less utilized signals are hedge fund and insider trading sentiment. We have shown that, historically, those who follow the top picks of the best fund managers can trounce the S&P 500 by a healthy margin (see the details here).

Unlike some fund managers who are betting on Dow reaching 40000 in a year, our long-short investment strategy doesn’t rely on bull markets to deliver double digit returns. We only rely on hedge fund buy/sell signals. We’re going to review the latest hedge fund action encompassing Target Corporation (NYSE:TGT).

What does smart money think about Target Corporation (NYSE:TGT)?

At Q2’s end, a total of 37 of the hedge funds tracked by Insider Monkey held long positions in this stock, a change of -26% from the previous quarter. By comparison, 34 hedge funds held shares or bullish call options in TGT a year ago. With hedge funds’ sentiment swirling, there exists a select group of key hedge fund managers who were upping their holdings significantly (or already accumulated large positions). 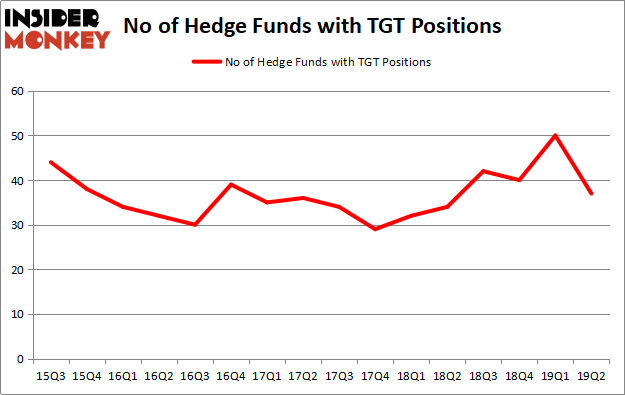 More specifically, Renaissance Technologies was the largest shareholder of Target Corporation (NYSE:TGT), with a stake worth $271 million reported as of the end of March. Trailing Renaissance Technologies was AQR Capital Management, which amassed a stake valued at $204.6 million. D E Shaw, Two Sigma Advisors, and Alkeon Capital Management were also very fond of the stock, giving the stock large weights in their portfolios.

Seeing as Target Corporation (NYSE:TGT) has experienced declining sentiment from the entirety of the hedge funds we track, it’s easy to see that there is a sect of hedge funds that decided to sell off their full holdings last quarter. At the top of the heap, James Parsons’s Junto Capital Management dropped the biggest stake of the 750 funds monitored by Insider Monkey, totaling an estimated $42.6 million in stock, and Dmitry Balyasny’s Balyasny Asset Management was right behind this move, as the fund cut about $23.8 million worth. These transactions are interesting, as total hedge fund interest fell by 13 funds last quarter.

As you can see these stocks had an average of 33.5 hedge funds with bullish positions and the average amount invested in these stocks was $1473 million. That figure was $1228 million in TGT’s case. Micron Technology, Inc. (NASDAQ:MU) is the most popular stock in this table. On the other hand Banco de Chile (NYSE:BCH) is the least popular one with only 6 bullish hedge fund positions. Target Corporation (NYSE:TGT) is not the most popular stock in this group but hedge fund interest is still above average. Our calculations showed that top 20 most popular stocks among hedge funds returned 24.4% in 2019 through September 30th and outperformed the S&P 500 ETF (SPY) by 4 percentage points. Hedge funds were also right about betting on TGT as the stock returned 24.4% during the third quarter and outperformed the market. Hedge funds were rewarded for their relative bullishness.