Is Cleveland-Cliffs Inc (NYSE:CLF) a good equity to bet on right now? We like to check what the smart money thinks first before doing extensive research on a given stock. Although there have been several high profile failed hedge fund picks, the consensus picks among hedge fund investors have historically outperformed the market after adjusting for known risk attributes. It’s not surprising given that hedge funds have access to better information and more resources to predict the winners in the stock market.

Cleveland-Cliffs Inc (NYSE:CLF) was in 26 hedge funds’ portfolios at the end of September. CLF investors should be aware of a decrease in hedge fund sentiment of late. There were 28 hedge funds in our database with CLF positions at the end of the previous quarter. Our calculations also showed that CLF isn’t among the 30 most popular stocks among hedge funds (click for Q3 rankings and see the video below for Q2 rankings). At the end of this article we will compare CLF against similarly valued peers like PennyMac Mortgage Investment Trust (NYSE:PMT), Banner Corporation (NASDAQ:BANR), JELD-WEN Holding, Inc. (NYSE:JELD), and SJW Group (NYSE:SJW).

To the average investor there are numerous tools investors can use to evaluate their holdings. Two of the most innovative tools are hedge fund and insider trading activity. We have shown that, historically, those who follow the top picks of the best investment managers can outclass the market by a superb margin (see the details here).

Unlike the largest US hedge funds that are convinced Dow will soar past 40,000 or the world’s most bearish hedge fund that’s more convinced than ever that a crash is coming, our long-short investment strategy doesn’t rely on bull or bear markets to deliver double digit returns. We only rely on the best performing hedge funds‘ buy/sell signals. Let’s take a peek at the recent hedge fund action surrounding Cleveland-Cliffs Inc (NYSE:CLF). 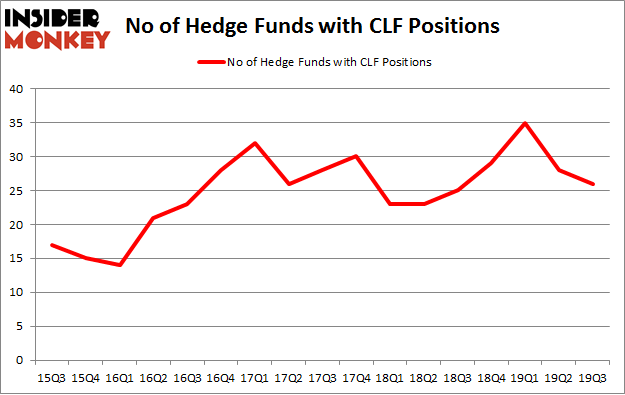 More specifically, Fisher Asset Management was the largest shareholder of Cleveland-Cliffs Inc (NYSE:CLF), with a stake worth $98.3 million reported as of the end of September. Trailing Fisher Asset Management was Contrarian Capital, which amassed a stake valued at $76.2 million. Bridgewater Associates, Citadel Investment Group, and Masters Capital Management were also very fond of the stock, becoming one of the largest hedge fund holders of the company. In terms of the portfolio weights assigned to each position Contrarian Capital allocated the biggest weight to Cleveland-Cliffs Inc (NYSE:CLF), around 6.95% of its portfolio. Tegean Capital Management is also relatively very bullish on the stock, setting aside 4.29 percent of its 13F equity portfolio to CLF.

Since Cleveland-Cliffs Inc (NYSE:CLF) has witnessed falling interest from hedge fund managers, we can see that there were a few fund managers who were dropping their positions entirely in the third quarter. At the top of the heap, Ross Turner’s Pelham Capital said goodbye to the biggest position of all the hedgies watched by Insider Monkey, comprising an estimated $22.7 million in stock, and Todd J. Kantor’s Encompass Capital Advisors was right behind this move, as the fund dropped about $20.2 million worth. These bearish behaviors are intriguing to say the least, as total hedge fund interest dropped by 2 funds in the third quarter.

Let’s check out hedge fund activity in other stocks – not necessarily in the same industry as Cleveland-Cliffs Inc (NYSE:CLF) but similarly valued. These stocks are PennyMac Mortgage Investment Trust (NYSE:PMT), Banner Corporation (NASDAQ:BANR), JELD-WEN Holding, Inc. (NYSE:JELD), and SJW Group (NYSE:SJW). All of these stocks’ market caps are similar to CLF’s market cap.

As you can see these stocks had an average of 14.75 hedge funds with bullish positions and the average amount invested in these stocks was $153 million. That figure was $297 million in CLF’s case. SJW Group (NYSE:SJW) is the most popular stock in this table. On the other hand PennyMac Mortgage Investment Trust (NYSE:PMT) is the least popular one with only 13 bullish hedge fund positions. Compared to these stocks Cleveland-Cliffs Inc (NYSE:CLF) is more popular among hedge funds. Our calculations showed that top 20 most popular stocks among hedge funds returned 37.4% in 2019 through the end of November and outperformed the S&P 500 ETF (SPY) by 9.9 percentage points. Hedge funds were also right about betting on CLF as the stock returned 12.3% during the first two months of Q4 and outperformed the market by an even larger margin. Hedge funds were clearly right about piling into this stock relative to other stocks with similar market capitalizations.