It seems that the masses and most of the financial media hate hedge funds and what they do, but why is this hatred of hedge funds so prominent? At the end of the day, these asset management firms do not gamble the hard-earned money of the people who are on the edge of poverty. Truth be told, most hedge fund managers and other smaller players within this industry are very smart and skilled investors. Of course, they may also make wrong bets in some instances, but no one knows what the future holds and how market participants will react to the bountiful news that floods in each day. The S&P 500 Index gained 5.2% in the 12 month-period that ended October 30, while less than 49% of its stocks beat the benchmark. In contrast, the 30 most popular S&P 500 stocks among the hedge fund investors tracked by the Insider Monkey team returned 9.5% over the same period, which provides evidence that these money managers do have great stock picking abilities. Even more to that, 63% of these stocks managed to beat the S&P 500 Index. That’s why we believe it isn’t a waste of time to check out hedge fund sentiment before you invest in a stock like Sarepta Therapeutics Inc (NASDAQ:SRPT).

Hedge funds are overwhelming bullish on Sarepta right now, as a net total of 17 of the hedge funds tracked in our system became shareholders of the stock in Q2. Among them were prominent healthcare-focused hedge funds like VenBio Select Advisor, Redmile Group, and Deerfield Management, though Phill Gross and Robert Atchinson’s Adage Capital Management remained the largest shareholder with 1.06 million shares. Despite suffering an October swoon like virtually every other stock, Sarepta’s stock has had an outstanding year, gaining over 150%. President and CEO Douglas S. Ingram seems convinced there are greater gains to come, as he spent just over $2 million buying 16,695 shares on October 30, which topped our list of The 25 Biggest Insider Purchases in October.

What have hedge funds been doing with Sarepta Therapeutics Inc (NASDAQ:SRPT)? 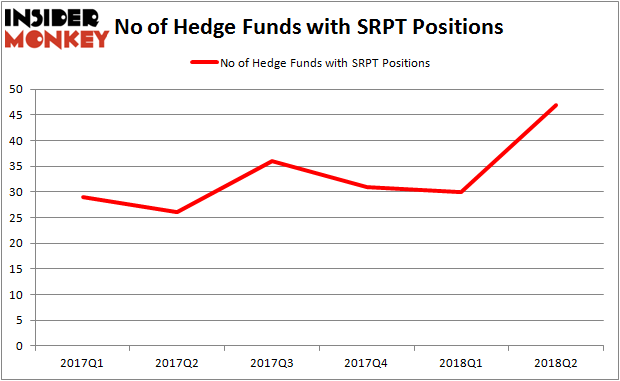 Among these funds, Adage Capital Management held the most valuable stake in Sarepta Therapeutics Inc (NASDAQ:SRPT), which was worth $139.7 million at the end of the second quarter. On the second spot was venBio Select Advisor which held a $126.8 million position. Ghost Tree Capital, Sabby Capital, and Sectoral Asset Management were also bullish on Sarepta Therapeutics Inc (NASDAQ:SRPT), allocating a large percentage of their 13F portfolios to this stock.

As you can see these stocks had an average of 33 hedge funds with bullish positions and the average amount invested in these stocks was $1.26 billion. That figure was $1.12 billion in SRPT’s case. Liberty Media Corporation (NASDAQ:FWONK) is the most popular stock in this table. On the other hand Reinsurance Group of America Inc (NYSE:RGA) is the least popular one with only 20 bullish hedge fund positions. Compared to these stocks Sarepta Therapeutics Inc (NASDAQ:SRPT) is more popular among hedge funds. Hedge funds are buying up this stock in droves right now, as is the company’s own CEO, so Sarepta may be worth a closer look and possible place in your portfolio.

Is SRPT A Good Investment Right Now? Is SRPT A Good Stock To Buy? NASDAQ:SRPT The 25 Biggest Insider Purchases in October Yahoo Finance