Although the masses and most of the financial media blame hedge funds for their exorbitant fee structure and disappointing performance, these investors have proved to have great stock picking abilities over the years (that’s why their assets under management continue to swell). We believe hedge fund sentiment should serve as a crucial tool of an individual investor’s stock selection process, as it may offer great insights of how the brightest minds of the finance industry feel about specific stocks. After all, these people have access to smartest analysts and expensive data/information sources that individual investors can’t match. So should one consider investing in Meredith Corporation (NYSE:MDP)? The smart money sentiment can provide an answer to this question.

The emphatic answer appears to be a no in this case. Hedge fund ownership of Meredith Corporation continues to fall, sliding by 37% over the past five quarters. Just 12 of the hedge funds tracked by our custom database were long Meredith in the middle of 2018, though they did own 16% of the company’s shares at that time. However, billionaire Ken Fisher, who loves dividend stocks, sold this off in Q3, unloading what was formerly a $45.81 million position. Meredith Corporation just snuck into our list of the 25 Best Dividend Stocks for Retirement, grabbing the final spot.

In today’s marketplace there are many formulas shareholders can use to grade publicly traded companies. A pair of the most underrated formulas are hedge fund and insider trading moves. Our experts have shown that, historically, those who follow the best picks of the best hedge fund managers can outclass the market by a solid margin (see the details here).

At Q3’s end, a total of 12 of the hedge funds tracked by Insider Monkey were long this stock, a 20% fall from one quarter earlier and the 4th time in the past 5 quarters that hedge fund ownership has dropped. The graph below displays the number of hedge funds with bullish position in MDP over the last 6 quarters. So, let’s see which hedge funds were among the top holders of the stock and which hedge funds were making big moves. 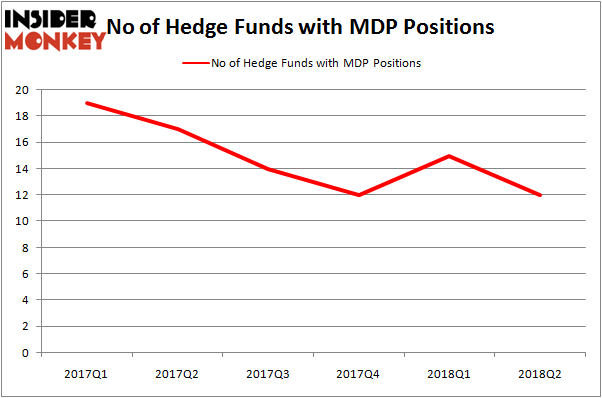 More specifically, Royce & Associates was the largest shareholder of Meredith Corporation (NYSE:MDP), with a stake worth $98.4 million reported as of the end of June. Trailing Royce & Associates was HG Vora Capital Management, which amassed a stake valued at $66.3 million. MFP Investors, Act II Capital, and Ariel Investments were also very fond of the stock, giving the stock large weights in their portfolios.

Due to the fact that Meredith Corporation (NYSE:MDP) has experienced falling interest from the entirety of the hedge funds we track, we can see that there lies a certain “tier” of fund managers that decided to sell off their positions entirely in the second quarter. Intriguingly, Israel Englander’s Millennium Management dumped the biggest position of the “upper crust” of funds monitored by Insider Monkey, valued at close to $18.2 million in stock. Michael Platt and William Reeves’ fund, BlueCrest Capital Mgmt., also dumped its stock, about $6.7 million worth. These bearish behaviors are interesting, as aggregate hedge fund interest was cut by 3 funds in the second quarter.

As you can see these stocks had an average of 15 hedge funds with bullish positions and the average amount invested in these stocks was $132 million. That figure was $367 million in MDP’s case. Advanced Energy Industries, Inc. (NASDAQ:AEIS) is the most popular stock in this table. On the other hand Dorman Products Inc. (NASDAQ:DORM) is the least popular one with only 10 bullish hedge fund positions. Meredith Corporation (NYSE:MDP) is not the least popular stock in this group but hedge fund interest is still below average and falling. This is a slightly negative signal and we’d rather spend our time researching stocks that hedge funds are piling on. In this regard CRZO, with an 80% jump in hedge fund ownership, might be a better candidate to consider a long position in.