Here is What Hedge Funds Think About Sprint Corporation (S)

Sprint Corporation (NYSE:S) investors should be aware of an increase in hedge fund interest lately though most hedge funds have no stomach for Sprint. Our calculations showed that S isn’t among the 30 most popular stocks among hedge funds. 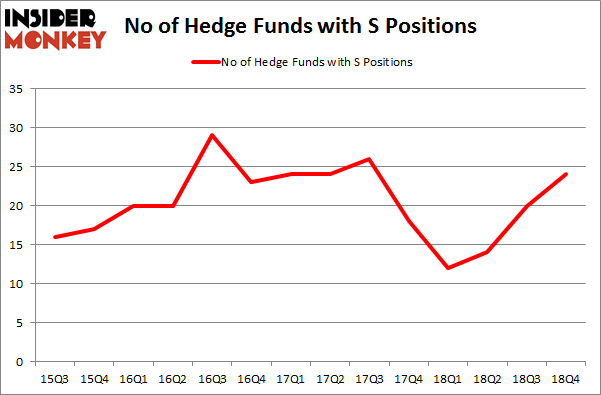 The largest stake in Sprint Corporation (NYSE:S) was held by Renaissance Technologies, which reported holding $189.6 million worth of stock at the end of September. It was followed by Magnetar Capital with a $153 million position. Other investors bullish on the company included Alpine Associates, Odey Asset Management Group, and Point72 Asset Management.

With a general bullishness amongst the heavyweights, specific money managers were leading the bulls’ herd. Point72 Asset Management, managed by Steve Cohen, assembled the biggest position in Sprint Corporation (NYSE:S). Point72 Asset Management had $44.4 million invested in the company at the end of the quarter. John Paulson’s Paulson & Co also made a $16.3 million investment in the stock during the quarter. The other funds with new positions in the stock are Carl Tiedemann and Michael Tiedemann’s TIG Advisors, and George Zweig, Shane Haas and Ravi Chander’s Signition LP.

As you can see these stocks had an average of 30.5 hedge funds with bullish positions and the average amount invested in these stocks was $678 million. That figure was $677 million in S’s case. Halliburton Company (NYSE:HAL) is the most popular stock in this table. On the other hand Baker Hughes, a GE company (NYSE:BHGE) is the least popular one with only 28 bullish hedge fund positions. Compared to these stocks Sprint Corporation (NYSE:S) is even less popular than BHGE. Our calculations showed that top 15 most popular stocks among hedge funds returned 19.7% through March 15th and outperformed the S&P 500 ETF (SPY) by 6.6 percentage points. Unfortunately Sprint wasn’t in this group. New hedge funds that bet on Sprint were disappointed as the stock returned 9.8% and underperformed the market. If you are interested in investing in large cap stocks, you should check out the top 15 hedge fund stocks as 13 of these outperformed the market.

Were Hedge Funds Right About Flocking Into Sempra Energy (SRE)?
Monthly Newsletter Strategy
Download a free copy of our newsletter and see the details inside!
Hedge Fund Resource Center
Related News
Hedge Funds Are Buying Sprint Corporation (S) 10 Companies with the Worst Customer Service in 2017 Wondering What’s Happening in the Financial Markets Today? Take a Look at These 34 Stories! Markets Snapshot: 34 Key Stories To Read About The Financial Markets Today Here is What Hedge Funds Think About Sprint Corp (S) Should You Follow Discovery Capital’s Lead and Reduce Exposure To Sprint (S), T MOBILE (TMUS) & Two Other Stocks? Why Bonanza, Quality Systems, Qualcomm, and More Are Making Headlines Ten of the Most Common Addictions 13 African Countries with the Largest White Population in 2018 6 Causes of Human Trafficking in Africa, India, and US
Billionaire Hedge Funds