A whopping number of 13F filings filed with U.S. Securities and Exchange Commission has been processed by Insider Monkey so that individual investors can look at the overall hedge fund sentiment towards the stocks included in their watchlists. These freshly-submitted public filings disclose money managers’ equity positions as of the end of the three-month period that ended June 28, so let’s proceed with the discussion of the hedge fund sentiment on Worldpay, Inc. (NYSE:WP).

Worldpay, Inc. (NYSE:WP) investors should be aware of an increase in activity from the world’s largest hedge funds lately. Our calculations also showed that WP is among the 30 most popular stocks among hedge funds.

Unlike some fund managers who are betting on Dow reaching 40000 in a year, our long-short investment strategy doesn’t rely on bull markets to deliver double digit returns. We only rely on hedge fund buy/sell signals. We’re going to take a gander at the fresh hedge fund action regarding Worldpay, Inc. (NYSE:WP). 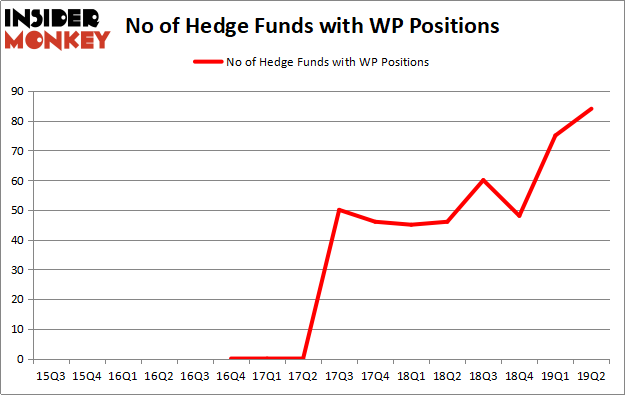 The largest stake in Worldpay, Inc. (NYSE:WP) was held by Millennium Management, which reported holding $428.8 million worth of stock at the end of March. It was followed by Melvin Capital Management with a $376.9 million position. Other investors bullish on the company included Select Equity Group, Diamond Hill Capital, and Citadel Investment Group.

As one would reasonably expect, some big names were leading the bulls’ herd. Senator Investment Group, managed by Doug Silverman and Alexander Klabin, initiated the most outsized position in Worldpay, Inc. (NYSE:WP). Senator Investment Group had $218.1 million invested in the company at the end of the quarter. Daniel Sundheim’s D1 Capital Partners also made a $144.6 million investment in the stock during the quarter. The other funds with new positions in the stock are Florian Kronawitter’s White Square Capital, John Overdeck and David Siegel’s Two Sigma Advisors, and Seth Wunder’s Black-and-White Capital.

As you can see these stocks had an average of 44 hedge funds with bullish positions and the average amount invested in these stocks was $2632 million. That figure was $5780 million in WP’s case. Delta Air Lines, Inc. (NYSE:DAL) is the most popular stock in this table. On the other hand Edwards Lifesciences Corporation (NYSE:EW) is the least popular one with only 33 bullish hedge fund positions. Compared to these stocks Worldpay, Inc. (NYSE:WP) is more popular among hedge funds. Our calculations showed that top 20 most popular stocks among hedge funds returned 24.4% in 2019 through September 30th and outperformed the S&P 500 ETF (SPY) by 4 percentage points. Hedge funds were also right about betting on WP as the stock returned 10.2% during Q3 before being taken over and outperformed the market by an even larger margin. Hedge funds were clearly right about piling into this stock relative to other stocks with similar market capitalizations.

Here is What Hedge Funds Think About Worldpay, Inc. (WP)?

Is Worldpay, Inc. (WP) A Good Stock To Buy According To Hedge Funds?

How Worldpay Inc and Other Hedge Fund Darlings Performed in Q2
Monthly Newsletter Strategy
Download a free copy of our newsletter and see the details inside!
Hedge Fund Resource Center
Billionaire Hedge Funds