Hedge Funds Have Never Been This Bullish On WhiteHorse Finance, Inc. (WHF)

WhiteHorse Finance, Inc. (NASDAQ:WHF) has seen an increase in support from the world’s most elite money managers of late. Our calculations also showed that WHF isn’t among the 30 most popular stocks among hedge funds (see the video below).

In the eyes of most stock holders, hedge funds are viewed as slow, old investment tools of years past. While there are over 8000 funds with their doors open at present, Our researchers hone in on the bigwigs of this group, about 750 funds. These investment experts oversee most of all hedge funds’ total capital, and by tracking their inimitable picks, Insider Monkey has revealed several investment strategies that have historically defeated the market. Insider Monkey’s flagship hedge fund strategy outperformed the S&P 500 index by around 5 percentage points per annum since its inception in May 2014. We were able to generate large returns even by identifying short candidates. Our portfolio of short stocks lost 25.7% since February 2017 (through September 30th) even though the market was up more than 33% during the same period. We just shared a list of 10 short targets in our latest quarterly update .

Heading into the third quarter of 2019, a total of 5 of the hedge funds tracked by Insider Monkey were bullish on this stock, a change of 67% from the previous quarter. By comparison, 2 hedge funds held shares or bullish call options in WHF a year ago. With hedge funds’ positions undergoing their usual ebb and flow, there exists a few noteworthy hedge fund managers who were boosting their stakes significantly (or already accumulated large positions). 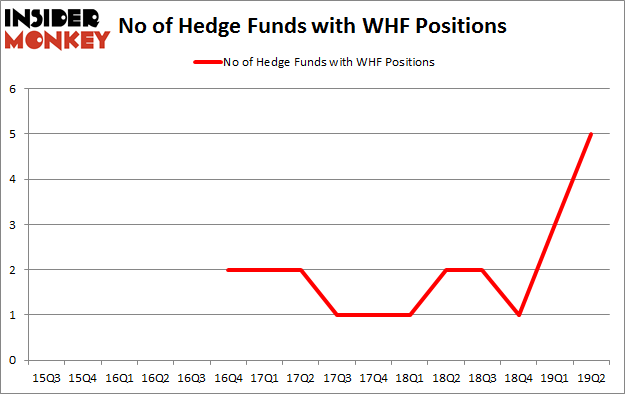 More specifically, Marshall Wace LLP was the largest shareholder of WhiteHorse Finance, Inc. (NASDAQ:WHF), with a stake worth $2.3 million reported as of the end of March. Trailing Marshall Wace LLP was Two Sigma Advisors, which amassed a stake valued at $1.4 million. Bulldog Investors, Millennium Management, and Citadel Investment Group were also very fond of the stock, giving the stock large weights in their portfolios.

As one would reasonably expect, some big names were breaking ground themselves. Bulldog Investors, managed by Phillip Goldstein, Andrew Dakos and Steven Samuels, assembled the most outsized position in WhiteHorse Finance, Inc. (NASDAQ:WHF). Bulldog Investors had $0.7 million invested in the company at the end of the quarter. Ken Griffin’s Citadel Investment Group also initiated a $0.2 million position during the quarter.

As you can see these stocks had an average of 8 hedge funds with bullish positions and the average amount invested in these stocks was $22 million. That figure was $5 million in WHF’s case. Craft Brew Alliance Inc (NASDAQ:BREW) is the most popular stock in this table. On the other hand Fang Holdings Limited (NYSE:SFUN) is the least popular one with only 6 bullish hedge fund positions. Compared to these stocks WhiteHorse Finance, Inc. (NASDAQ:WHF) is even less popular than SFUN. Our calculations showed that top 20 most popular stocks among hedge funds returned 24.4% in 2019 through September 30th and outperformed the S&P 500 ETF (SPY) by 4 percentage points. A small number of hedge funds were also right about betting on WHF, though not to the same extent, as the stock returned 3.9% during the third quarter and outperformed the market as well.

5 Best Stocks To Buy Right Now According To Billionaire Einhorn
Monthly Newsletter Strategy
Download a free copy of our newsletter and see the details inside!
Hedge Fund Resource Center
Related News
Noteworthy Insider Buying and Selling at MiMedx Group, Aetna & Others 11 Largest Auto Insurance Companies In The US In 2019 10 Poorest Cities in America in 2019 8 Lowest Tar and Nicotine Cigarette Brands in 2019
Billionaire Hedge Funds