Weyerhaeuser Co. (NYSE:WY) shareholders have witnessed an increase in hedge fund interest in recent months. WY was in 37 hedge funds’ portfolios at the end of December. There were 35 hedge funds in our database with WY positions at the end of the previous quarter. Overall hedge fund sentiment towards WY is at an all time high. This is usually a very bullish signal. For example hedge fund sentiment in Xilinx Inc. (XLNX) was also at its all time high at the beginning of this year and the stock returned more than 46% in 2.5 months. We observed a similar performance from Progressive Corporation (PGR) which returned 27% and outperformed the SPY by nearly 14 percentage points in 2.5 months. Hedge fund sentiment towards IQVIA Holdings Inc. (IQV), Brookfield Asset Management Inc. (BAM), Atlassian Corporation Plc (TEAM), RCL, MTB and CRH hit all time highs at the end of December, and all of these stocks returned more than 20% in the first 2.5 months of this year. 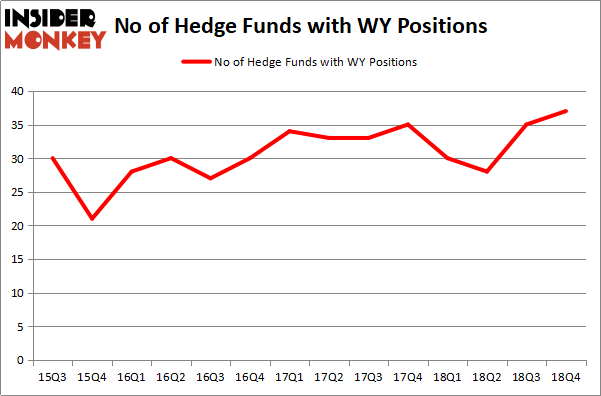 The largest stake in Weyerhaeuser Co. (NYSE:WY) was held by Third Avenue Management, which reported holding $105.1 million worth of stock at the end of September. It was followed by D E Shaw with a $84.1 million position. Other investors bullish on the company included Renaissance Technologies, Citadel Investment Group, and Two Sigma Advisors.

As you can see these stocks had an average of 30.25 hedge funds with bullish positions and the average amount invested in these stocks was $740 million. That figure was $568 million in WY’s case. CBS Corporation (NYSE:CBS) is the most popular stock in this table. On the other hand Smith & Nephew plc (NYSE:SNN) is the least popular one with only 11 bullish hedge fund positions. Weyerhaeuser Co. (NYSE:WY) is not the most popular stock in this group but hedge fund interest is still above average. Our calculations showed that top 15 most popular stocks among hedge funds returned 19.7% through March 15th and outperformed the S&P 500 ETF (SPY) by 6.6 percentage points. Hedge funds were also right about betting on WY, though not to the same extent, as the stock returned 18.3% and outperformed the market as well.